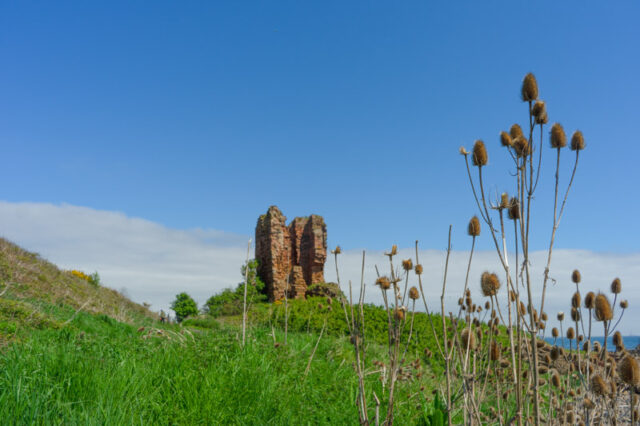 We spun our way over to Fife and parked ourselves in Kirkcaldy.

Walked out towards the old Seafield Tower. A ruined tower that dates from the 16th century. It’s in a poor state these days with notices telling all and sundry that it’s a dangerous site and you must keep out. We kept out today. We’ve wandered round it in the past, but it looks as if we won’t be walking round its ancient walls again. It looks precarious. From there we wandered on to look for the seals that loll about the rocks not far from the shoreline. It took us a while to see them, but they were there looking for all the world like big fat slugs. They may be beautiful creatures in the water, but out of it they look pretty ugly to me.

We climbed a bit further until we reached the part where the path drops down at some steps to run alongside the railway line. We’ve walked along this part of the path before and it’s not very scenic, so I had to be satisfied with taking a few shots of the view across the Forth to Edinburgh and East Lothian.

On the way back to the car, and just before we reached the Tower, I saw a patch of Teasels growing wild in the grass. I used them to frame a view of the tower, then decided that, actually they made a more interesting subject than the tower, so reframed, refocused and produced what was to become PoD.

Back at the car, Scamp had been thoughtful enough to pack a flask of hot water and some picnic food. We sat for half an hour taking in the views of the beach and the remains of the breakwater from when there was a coal mine where an estate of new houses now stand. I wonder if half of those folk knew what was under their foundations when they bought their sparkling new dream house. The seams of coal that was mined at Seafield reputedly ran for miles under the Forth.

After a beautiful day in Fife with wall to wall blue skies, we drove back to dull grey skies over Cumbersheugh. It was a good decision to get up and go early for a change and an even better idea to go east rather than west. 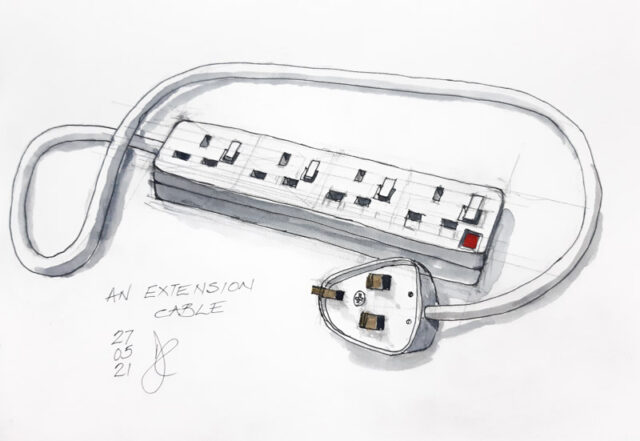 Topic to draw today was An Extension Cable. It may not be the most exciting subject, but it was what was asked for and I’ve drawn one of our four gang, three pin, switched UK extension cables. A must for any house built before about 2000. Modern houses have more wall sockets, even then, there are never enough of them. The drawing was good fun to produce, once I’d worked out the perspective.

Tomorrow there are no plans as far as I’m concerned. As usual, it’s weather dependent.