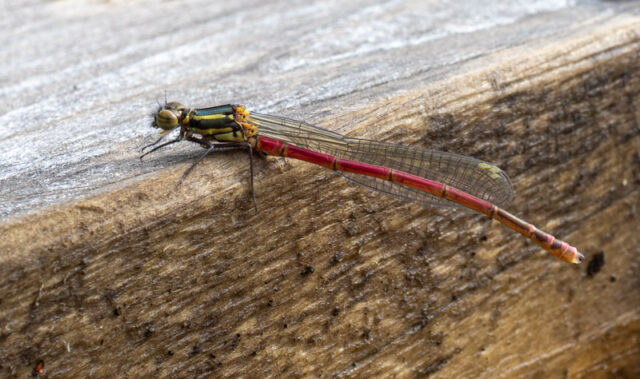 Today was the 25th May which is Towel Day to the knowledgeable few!

Today we were going shopping, not to be confused with yesterday when I was doing some ‘shopping. The apostrophe is important because it shows the hidden word “Photo”. Let’s say that today we were going for the messages. Scamp wanted to go to Morrisons, so the options were The Fort or Falkirk. The Fort offered the chance to go for a walk in nearby Drumpellier Park, but the weather didn’t look like walking weather. Great heavy rain clouds were gathering all the time and so we decided to go to Falkirk instead.

I must admit, I wanted to go to Falkirk to get my wedding ring resized. A few years ago I had to have my ring cut off when I staved my ring finger and it swelled up. Ever since I got it welded or brazed (whatever it is the call the fusing of the ring) I’ve felt it was just too slack. It was my own fault. I asked the jeweller to make it slacker than she suggested, but she was right and I was wrong. I said this to Scamp and then she said she wanted to have her original wedding ring resized too because of the opposite problem, hers is too small. It was agreed, we’d go to Falkirk, speak to the jeweller and then go for the messages. We would also have lunch at Morrisons because they do great chips (Scamp) and a wonderful roll ’n’ sausage (me). Chips, Roll ’n’ Sausage plus two coffees for less than a tenner? That’s a bargain in anybody’s books.

We drove through a bit of rain to get there, but we drove back through much heavier rain on the way back home. I kept watching out the window, hoping for a break in the weather and maybe just a chance of some sun. The temperature was mid teens, but the rain seemed unrelenting. Then the sun shone, the birds were singing and I was lacing up my boots. I walked to St Mo’s and took a few shots that weren’t all that inspiring, but on my second circuit of the pond I thought I saw a Jenny Long Legs (Crane Fly) landing on the upstand of the boardwalk. It wasn’t a Jenny, it was a Large Red damselfly. The first one I’d seen this year. I was just about to get a photo when a bloke spoke to me. He was complaining about the weather. I could have ignored him and got the shot, but I’d have felt bad about it for the rest of the day. So we discussed the changing seasons and how cold it had been then we bid each other goodbye. Now where was the damselfly. Had if flown away. No, it was still in the same place. Oh Joy of Joys! I got two shots, then a third of an empty upstand. I think it was freshly hatched and now it was off looking for dinner on those new wings. Still, I’d got two shots of the first damsel of the year.

Back home, Dinner was Butter Tofu Curry. Like Butter Chicken Curry, but vegan. You were supposed to use vegan butter too, but that wasn’t going to happen. The tofu was supposed to be coated in cornflour and deep fried, but either the temperature was wrong of I used too much oil, but it was rock hard and chewy to boot. However, on the up side, the curry sauce was very tasty. Spicy flavours without the heat. I’ll try it again with chicken next time. Vegan chicken, because the hens all ate good vegan seeds! 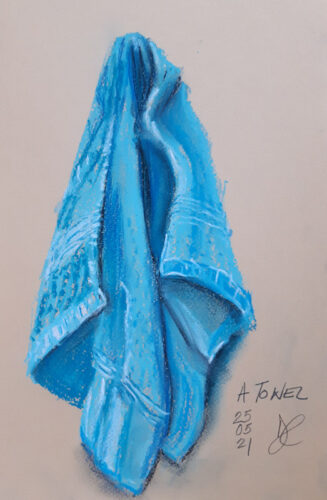 Today’s prompt asked for A Towel. This is 25th May which, to those in the know, is “Towel Day”. It commemorates the work of Douglas Adams who wrote The Hitchhiker’s Guide to the Galaxy.
If the foregoing means nothing to you, search out the book and read it. In it you will find that Arthur Dent is told to carry a towel with him at all times, just before the Earth is destroyed, hence “Towel Day”
The book was published 42 years ago this year. Also, to those in the know, that is a magical fact and a magical number. I’ve painted a towel before for a previous EDiM, but this time I wanted to use pastel. I only had three different blue pastel chalks plus a black and a white, and had to be careful where I used them to get the impression of a hung up towel. I was happy with the result although I was absolutely manky with the pastel dust.

Watched the first of the Bakeoff – The Professionals on C4 tonight. Amazing lengths these people go to to make cakes, 32 of them, all identical. They must be mad.