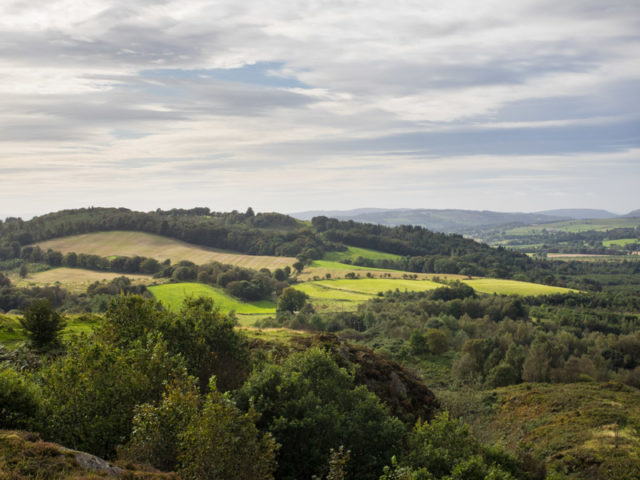 Easily achieved my 10,000 steps and my 8 active hours today!

Out to Milton of Campsie to a fairly new church hall for an extra dance class today. Big hall, but only three couples again. We went through our paces with Quickstep and Waltz, then had a go at the Over the Rainbow set for Jive. I think we were slightly further ahead than the other two, but not by much and the size of the hall was a bit off-putting to start with. We still managed to get in folks way when dancing, but not as much as at Blackfriars. I think we’ll go back again.

Back home, Scamp was gardening as usual, but the sun was shining, so why not. I grabbed my wee camera bag and took it for a walk up Croy Hill. I’ve been meaning to climb it for a few weeks now and, as the weather was kind today, that seemed like the ideal opportunity. I made the mistake of parking at Auchinstarry which meant I had to walk up the path to the start of the real assault on the hill, but I will remember that I can park nearer to the interesting part of the hill and forego the slog up from the car park.

The main hill was fine, although it was hard going when you haven’t done this sort of thing for a few years. Great view from the top, all the way along the valley and across to Glasgow too. The light was lovely on the Campsie. Took a couple of groups of shots for an extended panorama, but Lightroom baulked at it, so I had to use Autopano Giga which apparently has been bought out and discontinued by another company. Such a pity as it was an expensive, but really useful panorama maker. It was based on a free program, but the company who developed it added lots of bits and pieces that made it far more user friendly. That’s the way of things these days. After all that, I wasn’t that impressed with my pano, much preferring the view across to Bar Hill, the next Roman fort on the line of the Antonine Wall. That’s the one that got PoD.

Tonight I tried to update the firmware on our NAS drive, but it was a complete disaster from start to finish. It’s a Western Digital MyCloud and it’s as slow as treacle on a Mac. On a PC it’s no problem. I thought the ‘automatic updater’ had ‘bricked’ it, but it came back on line again after a cold restart. Might have a go at a manual install tomorrow.

Tomorrow morning I’m going to give some blood for my PSA test and for a diabetic check. Best to get them both done at the same time.