Today, as promised, I drove in to Glasgow

Ostensibly I was going to buy a white pen, and a pad of coloured paper and maybe to ask for some help from one of the Apple Geniuses (or is that Genies!) and possibly to get a photo and finally, a sketch over a cup of decent coffee would help. I actually achieved all of the above, but not all in Glasgow, as you will find out.

Paperchase didn’t have any white pens nor did they have pads of coloured paper. So, it was on to Cass Art with a stop off at the Apple shop first to speak to a Genius or a Genie if one were available. I was trying to find out how to transfer the apps and their data from the Mambo No 5 to the new and as yet unnamed new iPhone SE. I got an answer and it seems like it would work, but I have to confer first with my own Apple Genius to make sure they spoke the truth. Anyway, one tick on the list.

Cass Art had the pen and it looked as if it would work for my purpose. Unfortunately the sales person was having a long discussion with someone I took to be a customer, but who turned out to be the manager. It was only when she walked round to the stand by the tills to continue the conversation that I realised she worked for Cass Art. Both of them continued to blank me as I stood waiting to be relieved of my £3. Only when I turned to replace the pen in the rack did one of them, I don’t know which, ask if I needed any help. I told them I didn’t and left. This is the second, and last time I’ve had problems with Cass Art.

With Cass Art off my Christmas card list, it was down to Millers and glory be, they did have the pen and the paper. A bit more expensive than Cass, but much better to deal with. That made three ticks on the list.

Continued my sojourn to The Fort looking for a book (it wasn’t on the list.) Didn’t get it, but I did get a photo which you will see above. Only one task to complete, the sketch possibly over a cup of coffee. 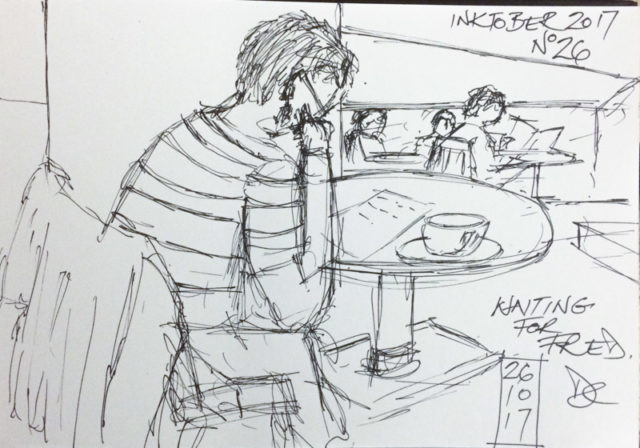 I was early for once getting to Costa in Cumbersheugh and settled in the only seat available. What better place to do some sketching than over a cup of coffee. I decided that the lady at the next table would be a good subject to sketch. Didn’t notice that she’d seen me. She even came over to speak. I’m not sure if she was impressed with the sketch, but she was impressed with my bravery, drawing in public. We discussed Landscape Artist of the Year for a while and then she took her leave. Whoever you were, lady with the striped top in Costa today, thanks for speaking. Brightened my day! Also, the last tick in the last box.

Tomorrow it’s the in-house version of Masterchef (without the fat baldy bloke.)