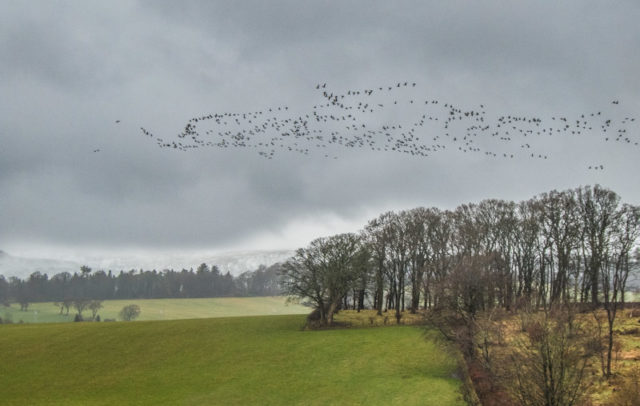 Coffee at midday with the rest of the Auld Guys.

Topics under discussion were how to fix NLC, health centres and Boris.

With the world once again set to rights, we went our separate ways and vowed that we’d organise our next meeting in a pub in Glasgow. We’ve been saying it for years and it hasn’t transpired yet. Perhaps 2020 will be that year.

When I got home, Gems were in full voice, so I swiftly had a roll ’n’ bacon and went out into the grim sleet to see if there were any pictures out there worth taking. There were as it happened. I’d stopped on one of my favourite places for a view of the Campsie covered in snow when the clouds came down and obscured them. Then I heard the sound of geese and a large skein appeared from behind some trees. There seemed to be hundreds of birds in the group that split up and rejoined as I grabbed my camera and shot off a few frames through the smirr that had started to fog up the lens. A quick wipe with my shirt tail cured that and I go some more before they headed off north. What do they know that I don’t. The resulting image is at the top of the page.

Dancing tonight was a reprise of waltz which I will tentatively say we can now complete without arguing 75% of the time. After that we did some foxtrot and made a bit of hash of it, but nothing that can’t be improved with some more practise. New to us tonight was quickstep. Now we’ve done quickstep with Michael, but this was quickstep with names for all the steps and the figures and it seemed to flow much better than when we were dancing it in Blackfriars. I’m not saying we have it off pat yet, it’s still a work in progress, but we’re about half way there. Feeling much better about this dancing lark.

I’m not publishing my attempt at a Mandala which is today’s challenge. I wasted an hour of my life drawing it and I don’t intend to foist it on anyone else. If you want to see it go to FB or Flickr.

Tomorrow, no plans, but I think we’ll be practising the quickstep figures.