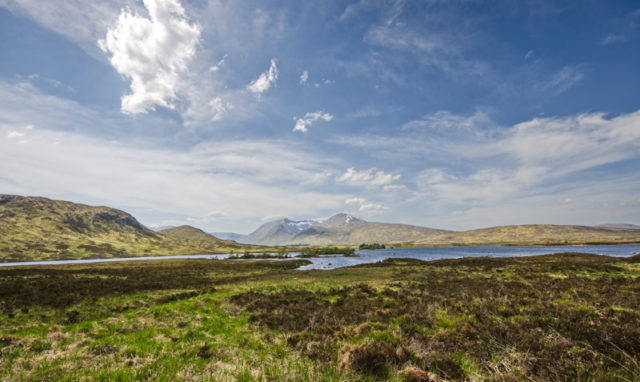 “Coming down is the hardest thing”. That’s what the late Tom Petty said in “Learning to Fly”. It’s true and it’s even more true when you’re driving away from Skye and the sun is shining.

We left early, just after 10am, because we were ready and there seemed no point in prolonging the agony. The drive down was amazingly quiet, at least until we reached Rannoch Moor where we picked up some traffic. We stopped at the awkwardly named Lochan na h-Achlaise which apparently translates as Loch of the Armpit, or Loch Oxter. Anyway, that’s where I got PoD. It took a little longer to process than I’d anticipated. The basic levels and stuff was done in Lightroom and then I handed it over to ON1 for some more delicate make-up. The result went back into Lightroom for the final cropping and I’m more than happy with the final result.

Loch Oxter got quite noisy too with a collection of BMWs, Subaru Imprezas, Audis and assorted low riding Peugeots about 10 in all showing an impressive turn of speed as they turned the A82 into a drag strip. Noisy, dangerous and quite exhilaration, although others of the ‘blue rinse brigade’ were heard to say that “there’s no need for that” and “shouldn’t be allowed”. True, but that’s only because they were never young once. Some folk are born old.

Back on the road stopped for lunch at Morrisons in Fort William The next drag was a real drag. For about a mile and a half outside Callander we crawled forward in a long queue held there because of two sets of traffic lights. One set was true traffic lights at a junction and the other was a set of pedestrian lights where the ‘grannies’ were crossing and re-crossing the road just to annoy us drivers. Can’t they find somewhere better to spend their Sunday afternoon? I think it’s the same ones who where hissing and harrumphing about the folk of the testosterone brigade up at Loch Oxter.

Once we were past there, it was plain sailing all the way home. About 6 hours driving with half an hour out for lunch and half an hour out for Callander. That’s about average. It’s a long day and a long drive, but it has to be done and at least there weren’t very many potholes on the road.

Tomorrow is a relaxing day. Very little or no driving planned.