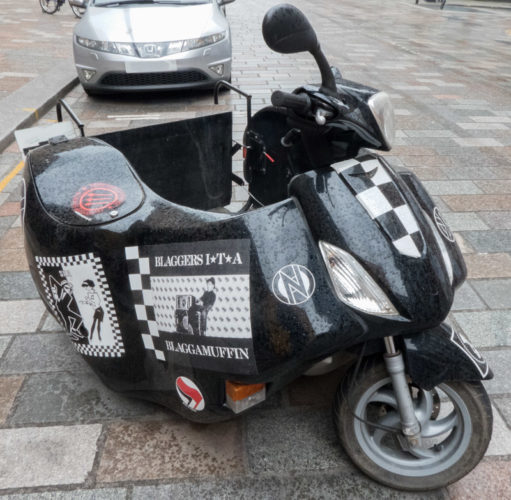 Confused? You will be.

Today we went dancin’, although I had been warned not to by my experts. However, we had agreed between ourselves that a half hour of ballroom wouldn’t do me very much harm. It didn’t. I’d told Michael that I was crocked and that I’d sit out the jive. He agreed.

We danced the waltz quite well, but Michael pointed out where we were making it too simple, and then it was so obvious that we were cutting corners. It always is obvious once you have it pointed out. It’s the turns, even in the waltz that are causing the problem with my knee. I’m sure about it now.

Walking back from the dancin’ was where I saw the motorbike or scooter to be more exact, with a wide empty space behind the handlebars. It was Scamp who noticed that there was no seat and then we both realised at the same time that this was a scooter for a disabled person in a wheelchair. What a brilliant idea. This was no Mobility Scooter, this was a scooter for a biker in a wheelchair. Not only that, this was a vehicle with street cred and attitude. It even had a handbrake! How smart is that! There was no competition, this had to be PoD.

Portrait class tonight was more interesting because it was our first chance to use colour. It was going well until someone 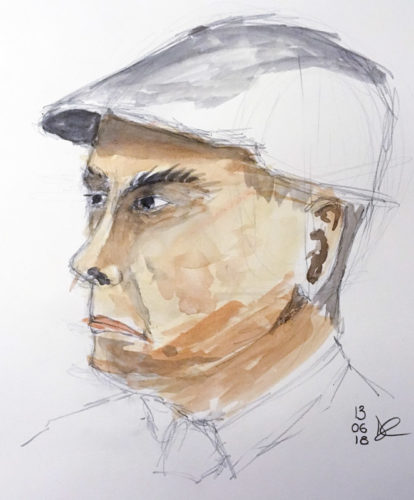 noticed that the elderly gentleman, Jim, who was sitting for us had gone a strange colour and seemed to be on the point of passing out. We got him off his stool and on to a chair, but he was determined to continue and posed again for the second sitting in the chair. I was quite pleased with my last night’s work in the class. It’s not been a wonderful class, with little in the way of actual tuition, but it’s given me the chance to measure my skills against others like myself. Learned a bit about where all the bits of a face go(!) and gained some confidence in my drawing. Still don’t want to do a full life class. I remember saying to the principal teacher of art at school that I couldn’t handle figure work (nudes) and he told me with a wink, “You’re not really meant to handle them!”

Another blood letting tomorrow, then we’re hoping to face the stormy weather and go for lunch in the West End.