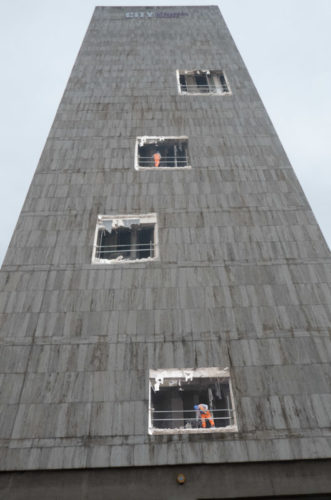 We had one quick possibly three minute practise in the living room before we went in to Glasgow. Just enough to prove to ourselves (i.e. ME) that we had mastered the first run of steps from the Box Step through the Whisk & Wing to the Chasse then on through the difficult (for me) reverse section and the Promenade into the corner. We didn’t have enough room to do the prepare step for the Natural Turn and the turn itself, but we were sure we could wing it (no pun intended).

In Glasgow we were sure we could do it, but I stumbled a bit in the reverse section and that’s when Michael pounced and started to tell me what I had done wrong. I knew what I had done wrong and I also knew that he wasn’t going to give me another lecture that just wasted more of our precious time. I turned to meet him face to face and told him that his constant interruptions were doing more harm than good because it was destroying our flow. I think he needs face to face contact to know that you’re speaking to him, because he does have a hearing problem. I also believe he uses that as a way to ignore you. He didn’t get the chance to ignore me. He agreed, but still showed me what I was doing wrong, I accepted it, but that was the last correction he made in the hour we were there. Maybe he wasn’t best pleased with me speaking back to him, but I don’t care. Both waltz and jive were much better than last week. That doesn’t mean that I can do either with any degree of skill, but we are much better than when we started.

On the way back to the car I got today’s PoD. Well, it’s actually two photos merged in Photoshop. Not the most successful piece of photo manipulation, but not bad. Again, the photos took about five minutes and the post processing took around two hours.

Wednesday dinner is a much more leisurely affair now that we are going to the later salsa classes. On today’s menu was Prawn & Pea Risotto. It was deemed the best I’ve made by the food critics (Scamp and me). I think it was down to the vast amount of butter I used.

In class tonight, we finished with La Rosa, Zorro and Infinity. All rueda moves and all utterly confusing. I imagine these are their real names because Jamie just rhymed them off so quickly. I must look them up some time on YouTube.

Not a bad day and a warm one too with lots of sunshine on offer. Tomorrow looks like being even better, so we may go out somewhere nice.