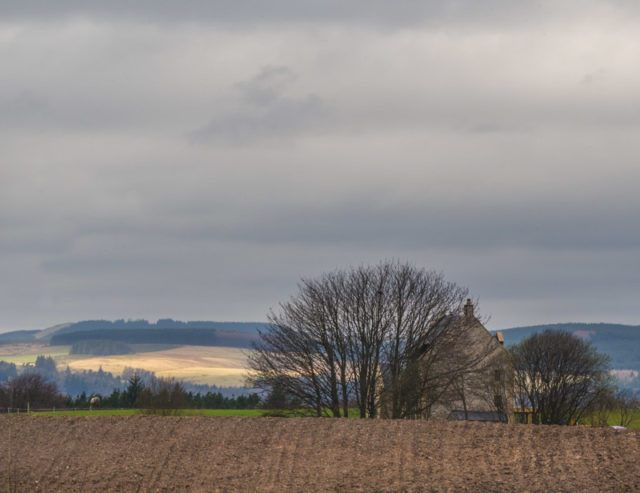 We said yesterday that today we’d go somewhere nice. We did.

I’d half intended that we’d get up fairly early and go somewhere for a walk today. It was the other half that won in the end. The half that said “Well, it’s pretty dull, but it might get better if I finish this chapter.” I finished the chapter. In fact we both finished a few chapters, but it was still dull outside. Finally, when Scamp asked me if I wanted the coffee maker switched on, I made the decision that we should go and chase the sun. East seemed the best bet, so we pointed the Juke at Fife and then Kinross and drove to Loch Leven.

Managed to find a parking space under some Scots Pines where rooks were busy building nests. We were just about ready to go for our walk when Scamp found out the truth in the expression about not shitting in the nest. The rooks were being very careful not to mess up the nest and dumping their ‘doings’ over the side and some of it splattered on her hair. Thankfully I just caught some on my jeans. While I was wiping her hair with a tissue, I did think about telling her that it’s meant to be lucky. I decided to bite my tongue on this occasion!

We settled on a clockwise walk round the loch and found that it was just as boring as the anti-clockwise walk we’d done many times before. We walked until we caught sight of Loch Leven’s Larder, the cafe we were going to have lunch in. We both considered walking on, but finally decided to leave that for another day, because the promised sunshine still hadn’t arrived. We could see it in the distance across the loch and also away to the west – the direction we’d come from. We walked back to the car and the scenery was better in that direction. Saw some deer down by the loch side and then spotted a pheasant in the woods. Other than that and some yellow flowers there wasn’t much to recommend the walk. We walked along this path one day a few winters ago and it looked beautiful all frosted under a blue sky. It was nothing like that today. Having said that, it was on the return journey I got the PoD of a farm. The light on the far field was a lucky. Usually I have to fake these things, but today the light lit it up for me.

Went to Loch Leven’s Larder for lunch.  It wasn’t as busy as I’ve seen it, but still doing a fair trade. Years ago it was just a rough and ready farm cafe that served good food. Now it’s a cafe bolted on to a deli a kitchen shop, an ice cream parlour and a shop selling overpriced tat. Ok, maybe that’s being a bit harsh, and it is catering to a certain demographic. I’m not in that group.  While we were having lunch the sun was just coming out and the view across the loch was beautiful.  Just our luck.  We were inside when the sun was out!

Drove home using the satnav after I took a wrong turning. Stopped for a while at Torryburn in Fife and there’s a couple of shots of it on Flickr if you’re interested.

Tomorrow I think Scamp wants to do some gardening. I may cycle if the weather’s as warm as today.