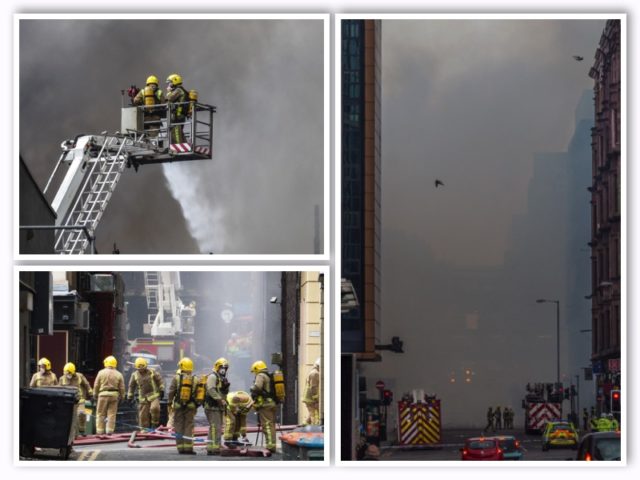 I decided to have some ‘me time’ today in Glasgow.

The plan was for me to take the bus in to Glasgow and then go to the West End on the subway for some sketching in the Botanic Gardens, then grab that shot from yesterday when I returned to the City Centre. It didn’t exactly work out that way.

On the way in there was an enormous pall of smoke on the horizon. A really mucky looking pall of smoke. Then I noticed Scamp had sent me a text to say that there was a big fire on Sauchiehall Street (AKA Sausage Roll Street). As we got near Glasgow I could see that it was indeed a big fire. Came out of the bus station and wandered round the side of the Concert Hall to see if there were any photos to be taken. There were, and hundreds of people were taking them with every conceivable photographic device, from old clunky SVGA point ’n’ shoot cameras to professional full-frame DSLRs and everything in between. And then there were the phones. This was a big incident. I took some right away with the Teazer.
First rule of photography: Take the shot, then think about it. You might not get another chance.

After that I started looking for a decent angle and a way to isolate some of the action. I took about 15 – 20 shots before the police came and ordered us across the road, behind a newly erected safety cordon. Really, it was like herding cats. Some folk moved away as directed while others, new on the scene said “Oh, what’s happening there?” and slipped under the cordon (because it wasn’t applicable to them, obviously) and calmly started shooting with their shiny new smartphones. I sometimes feel that the police can be a bit overpowering and heavy handed, but today they deserved medals, each and every one of them for not losing their cool and just huckling some of the numpties off to Stewart Street (polis station). By that time I had all the shots I wanted and walked down Bucky Street to get the subway to Kelvinbridge.

Walked up Great Western Road to the Botanics and after a walk round the Kibble Palace, I went back out and started sketching the Victorian glasshouse in all its wrought iron glory. Not the best sketch I’ve done, but it got the gist of the building. Also, although the temperature was almost 10ºc, it was still cool. Maybe too cool to be sitting on a park bench for the half hour it took for the sketch.

Back down Byres Road and got the subway back to Glasgow. Took it to St Enoch’s to the Nero for a spot of light and late lunch. Nice wee alliteration there! Walked up Bucky Street to the new even more extreme cordon, this time cutting off Jessops and the other Cafe Nero (glad I hadn’t banked on getting my lunch in there!) The polis had craftily blocked off one of the entrances to Buchanan Galleries and just extended the cordon across the road there. Everyone was behaving themselves now because the flames were almost out and there wasn’t much to see. Out through JL and was just crossing over to the road when I saw the shot on the right at the top. It looked like a film set. Now if that had been London or Birmingham or Manchester, the words on everyone’s lips would have been “Terrorist Incident”. In Glasgow it was “So is Lauders Bar open?” (Lauders is the pub on the corner next to the fire.)

PoD was the firefighters on the extended platform, top left. Whatever these blokes get paid, it’s not enough.

Don’t know what we’re doing tomorrow. Scamp’s meeting Shona for a catch-up. I might paint.