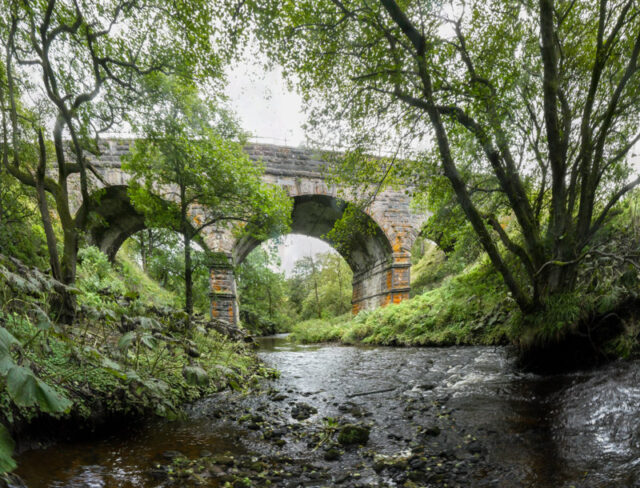 Scamp suggested I go out for a walk along the Luggie today while she went to Tesco. It was her turn to cook and we’d discussed her short list. It seemed like a plan.

Before we went our separate ways in separate cars, we emptied our ‘Tattie Bag’ which we’d planted with three carefully selected Jersey Royals or something that looked like them away back in early May. Not seed potatoes, just some ordinary potatoes that had been chitting on the window ledge in the toilet. We actually got better results than we’ve had with ‘real’ seed potatoes. A nice big bowl full of them. Only one scabby one. I’d consider that a success.

Scamp drove off and I followed suit a few minutes later. Found out a few more things about Blue, like where to find the ‘destinations’ I’d programmed into the satnav. Took a dozen or so photos of the railway bridge over the Luggie from one side and 42 photos of it from the other side. I was intending to create two panoramas from them in an old piece of software I’d found the other day. Surprisingly it handled both sets of images well, although it struggled with the larger of the two. Not surprisingly the finished article weighed in at just under 2GB. That’s a lot of GB. The larger one became PoD.

Scamp’s dinner was Tuna Pasta with Beans (and chilli flakes). Possibly a touch too much chilli flakes, but it tasted very good indeed. I think we were both thankful for the half price trifle she’d bought for dessert!

Apparently NLC in their wisdom have granted permission for an outdoor funfair in Cumbersheugh in these Covid-19 times. What else would you do when Lanarkshire is about to have sanctions imposed to control an increase in infections than encourage crowds of people to attend a funfair? I suppose the council will have been paid royally by the promoters.

Tomorrow we may go for a socially responsible walk down Glasgow Green.