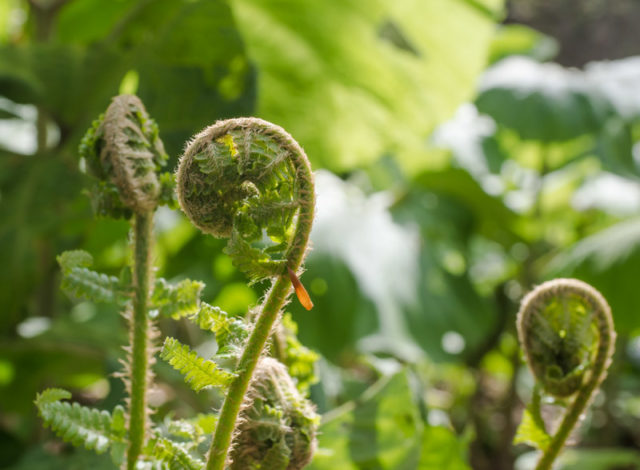 Thursdays are generally good. All the time in the world to do things. Why then am I still writing this blog at almost 11pm?

Spent most of the morning clearing up the back bedroom. Now it looks a bit better and the rubbish went into a black bag. Well, most of it anyway. Some was spared for a while, I’ll put it in a six month virtual box. Anything left in that box after six months will go into another black box. After lunch I took the black bag along with a clutter of plastic pots and containers, some paint pots neutralised with soil and compost and took the load to the tip.

Then went for a walk along the Luggie Water. First time I’ve been there for quite some time and with a bit of occasional sunshine, the green leaves down there were gleaming. PoD was a trio of fern croziers starting to unfurl. So many hues and shades of green if you care to look. 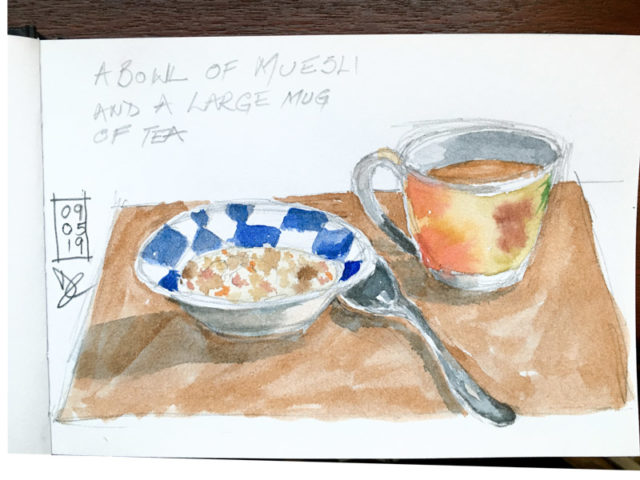 The topic for Every Day in May was “The first thing that comes to mind when you wake up”.  I chose Breakfast.
A plate of muesli and a large mug of Assam tea. I foolishly chose to use the Paperchase A5 sketchbook because I’d used one a year ago and it worked well for me. Unfortunately Paperchase have changed their paper and the pages in the new sketchbook are much more absorbent than the previous one’s. That’s why there’s a fair bit of ragged edges to the shadows. The paper isn’t properly sized in my opinion. Such a shame.

Tomorrow we have nothing planned. We’ll just have to see what turns up.