Not that anyone here will notice, but I’m writing this in Day One again. I’ve tried Journey and it’s ‘ok’, but only ‘ok’. Until it stops working completely, I’ll be using Day One and synching the ‘old school’ way.

Now, as to the day. It started out a bit misty and then the mist got thicker and thicker until it was officially fog. We were going to have lunch at The Smiddy just past the Blair Drummond turn off on the Callander road. After consideration, we decided that the fog probably really only extended to the outskirts of Cumbersheugh and we’d drive out of the fog into sunshine by the time we reached Haggs. Well, maybe not sunshine, but certainly out of the fog. Nope, that didn’t happen. It just got thicker, the closer we got to Stirling. I couldn’t believe the number of folk driving with no lights. I don’t mean fog lights, I mean any lights at all. Some had the DRL (Daytime Running Lights) on, but they come on automatically on most modern cars, but some had no lights of any kind. Yes, they could see perfectly well, but if you’re driving a grey car in fog you are kind of invisible. My cousin John told me years ago when I first got a motorbike to always drive with dipped headlights everywhere. Don’t use sidelights he told me, use headlights. They don’t cost anything more to run and one day they’ll save your life. Sensible instructions.

Anyway, we reached The Smiddy without incident and had lunch there:

Afterwards I got some sausages, a Denver steak, Ham trimmings and some Venison because their on-site butcher’s shop is good quality.

Got today’s PoD there. While we were having lunch I watched the fog lift quite a bit and thought my chance of a shot of a tree lined farm track was gone. I’d taken my small tripod with me because I guessed the light would be fairly low and if the fog was lingering in the low lying areas around the restaurant then I’d need some support. It’s just a light weight tripod, not as stable as the big Manfrotto 055, but it’s great for holding the Olys. The fog was just beginning to come down again when we were leaving the restaurant and I took my chance to grab my shot before the fog became too thick and obscured everything. I think, not, that I could have waited a little longer, but I didn’t want to waste too much time before we drove home. 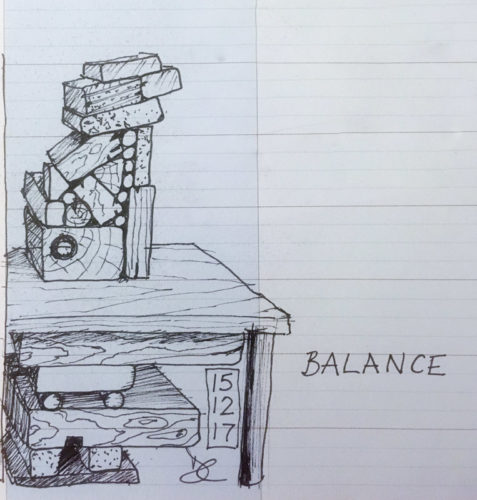 One more sketch to add for last week’s ink ’17.  This one, like last week’s was done on my mousemat / blotter / notepad, call it what you will.  It’s basically a doodle that evolved over a few days.  It’s in oblique projection (Aargh!  I hated oblique projection at school, both as a receiver and a giver of drawing skills), possibly the crudest form of projection, but also the easiest to learn.  It’s in ink and it’s done.  The maxim for Ink ’17.

No great plans for tomorrow. Maybe a swim. Maybe a trip into Glasgow. Depends as always on the weather.