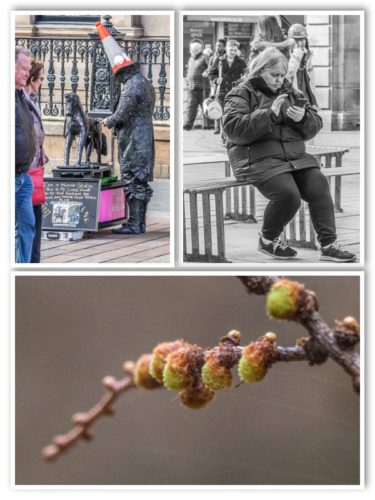 I usually list my alarms on the iPhone by where we were when they were created, however, today’s alarm which was sandwiched between ‘Last Day Cruise 2011’ and ‘Dubrovnik’ and was called ‘Just Get Up Ya Lazy Sod’.  It was for 6.15am!

Today, Scamp was to go to the hospital to be assessed by the plastic surgeon for a further operation on the site of the mole.  Unfortunately, the hospital was in Greenock, just over 40 miles away and on the other side of Glasgow.  Google estimated the time to get there for 9am was from 1 hour to  1 hour 40 minutes.  At the worst estimate, that’s an average speed of 24mph,  which is quite slow for, in fact illegal for, a motorway, but realistic for the M80/M8 at any peak time.  So that explains the 6.15am alarm.  I’d intended leaving at 7am and as the temperature last night was forecast to be below zero for most of the night, I knew I’d have to get out early to get the car warmed up and the windscreen scraped.  Not like the lucky folk with their heated front screens 😉

As usual when I know I’ve an alarm set, I seem to sleep for two hours at a time before waking, then as the allotted time approaches I enter deep sleep, only to get a rude awakening with some awful chime from the phone.  That’s what it was like today.

After prepping the car, we had a quick breakfast and were off, just after 7am.  Cutting a long story short, we entered the quagmire of traffic of the M80 / M8 intersection.  From there to the Kingston Bridge it was nose to tail and constantly changing to the lane that was moving fastest.  Luckily all those Monday and Wednesday nights stood me in good stead and I found the fastest lane through.  After the Kingston, it was good going for a while, until we reached Greenock, in fact. The scenery was beautiful all the way down the estuary, with pockets of fog and mist creating perfect photo opportunities.  Unfortunately, you can’t use ‘Photo Opportunity’ as a reason for stopping on the hard shoulder of a motorway.  Personally, I can’t understand why.

Almost at the hospital, we hit the ‘Road Closed – Follow Diversion’ sign.  For once, I followed the diversion with Scamp acting as a navigator who was becoming more and more concerned that we seemed to be going in the wrong direction, then seeing where it was leading us and confirming that we were, indeed, heading in the right direction.  Parked at the hospital with 10minutes to spare from the Google worst estimate.  Impressive, Mr G!

In and out of the consultant’s office within about 30 minutes, then it was the simpler route back to Glasgow, but the good light and the good photo opportunities were gone by now, of course.  Parked up on what will always be St James St. in Glasgow and went for a coffee in JL with Scamp before leaving her to meet up with ’The Witches’.  After doing some window shopping, I drove back home to a cold, dreich, Cumbersheugh.  I had thought I’d manage to get my bike out, but it was the cold east wind that put an end to that idea, so I did a bit of painting instead.  I also made some bread dough and retained enough to make a pizza.

Went for a late afternoon walk around St Mo’s, but there was nothing of interest to photograph.

Scamp arrived back about 7.30pm after having had a ‘Day in the Toon’.  It’s almost 11pm now and it’s been a long day, so I’m heading for the Land of Nod.