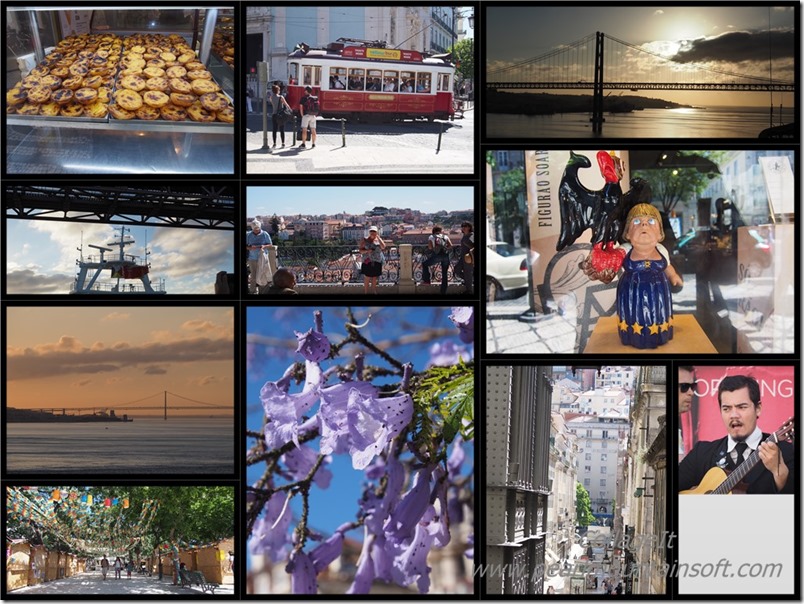 My Uncle Bob, when he was returning to Larkhall would say “Back to the land of Sugartops.”  For those not born in Larky, a sugartop was a Saturday morning staple.  It was a bit like a flattened roll with sugar syrup on top.  The syrup acted like an adhesive to hold the lump sugar on top.  You spread butter on the flat bottom of the sugartop (unsalted butter was best) and ate it for breakfast on a Saturday.  As far as I know, they were only made in Larky and then only by one bakers, Eadie’s which closed a long time ago and took with it the sugartop.  If Larky was the land of the sugartops, Lisbon must be the land of the Portuguese Custard Tarts.  I know you can get them in Costa’s in the UK and I’ve seen recipes for them in books, but nothing comes close to the Lisbon Custard Tart.  With that in mind, our first stop once we alighted from the bus was the tart shop.  Scamp remembered how to get there and flew as straight as an arrow to the cafe.  Two custard tarts, one sprinkled with cinnamon (for me).  One sprinkled with icing sugar (for Scamp).  Two coffees, one white, one black.  Cost?  €4.50!  A bargain in anyone’s book.  You eat the tart and drink the coffee standing at a shelf in the cafe.  There are no seats.  It’s a eat an go thing.  Maybe Eadie’s in Larky should have adopted that strategy with sugartops.

After our second breakfast we wandered round the squares of Lisbon.  By the way, when we were at the breakfast table in the restaurant this morning, it caused great hilarity when I said we were off to find some tarts in Lisbon.  I can’t see why.  We walked up and up and up the hill to see the view from the top.  On the way I listened to a girl singing and playing a spanish guitar.  A dangerous thing to play in Portugal I’d have thought.  The don’t have much truck with their bigger neighbour.  A bit like Scotland and England, so I can understand their mindset.  Anyway, I listened to this girl playing and singing and I quite liked what I’d heard, so I bought her CD for €5. Then it was time to start on the upward trek again.  The view from the top when we reached it was great.  I remember it from the last time.  The easy way to get up to the viewpoint is to take the funicular tram.  We chose to use this tram to get us down to the level of the three central squares.  It only takes about five minutes to complete the downward journey and halfway down you meet the other tram coming up.  Very neat and orderly.  I don’t know if they use the downward tram as a counterbalance for the other one coming up to safe energy or not, but it’s a gentle way to spend five minutes on these veteran trams.

I like Lisbon, we both do, and not just because of the custard tarts either.  The city seems as if it’s stuck in a timewarp.  Some of it looks quite Victorian, some of it harks back to the ‘50s, but not a lot of central Lisbon is modern.  The train station which also houses Starbucks has a lovely Art Nouveau frontage.  Possibly the poshest Starbucks I’ve ever seen.  Just along from Posh Starbucks is a tiny wee shop that is always seriously locked up with steel shutters on the door and behind the windows.  In the window is a wide selection of wicked looking knives.  Best of all though is the advert on the side for pistols, carbines, rifles and ammunition.  I wouldn’t be surprised if they could furnish you with an AK47.  They used to also sell fake, but very convincing police ID in a variety of nationalities.  They no longer have them in the window, but that doesn’t mean they don’t sell them inside.

Back at the ship we found a small pool at the stern and settled into sunbeds there, only to find that we had left the oversize towel pegs at home.  Scamp thought I’d packed them and I thought she had.  Oh dear.  Maybe we’ll find a Lakeland at Gibraltar tomorrow and get a new set.  They’re so useful for attaching your pool towel to your sunbed.

We stayed there until we sailed away from Lisbon for this year.  Hopefully we’ll be back.  As we sailed under the combined road and train bridge on our way out of Lisbon, I thought back to 6am this morning standing on the deck in my shirt sleeves freezing in the chill wind photographing us going under it on the way in.  It’s still impressive and it gives you a sense of scale of the ship seeing the minimal clearance between the top of the mast and the underside of the rail bridge part.

Show tonight was “Blame it on the boogie”.  Least said the better.  Not so much Boogie as Boggin!

Much later arrival in Gibraltar tomorrow, 11.30am.