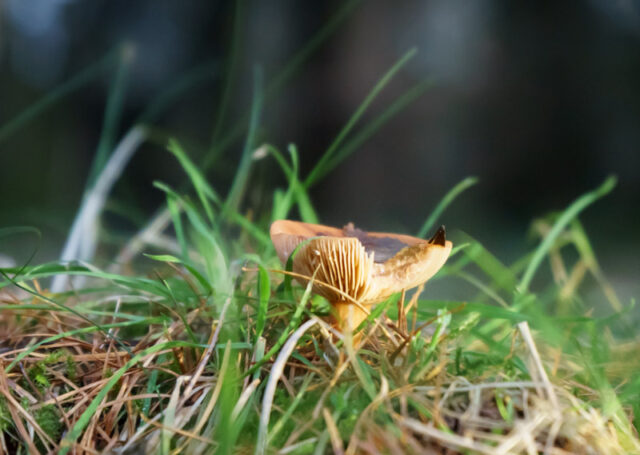 One of those days where there wasn’t much to encourage us to go out. Although it wasn’t cold, it felt damp and uncomfortable. Although I managed to do my ‘8 active hours’ according to the Fitbit, I couldn’t tell you how I achieved them. It felt like a day of sitting around.

It wasn’t until late in the afternoon that I managed to shift myself enough to go out to get some photos. I walked over to St Mo’s looking for some macro subjects to ignite my interest. The subjects were there, but I really needed the light to be better. More light would help and some of it needed to be directional. I had hopes that there might be some late sunshine when the clouds parted slightly to expose a tiny sliver of blue sky. However the tear in the clouds soon healed again and the sun was lost for another day. I found a small toadstool growing on the edge of the pine woods and tried unsuccessfully to get a decent, sharp image of it. That’s when I switched my phone on and used its torch to give me that directional light. It worked and I had my PoD.

Also on my phone came the news that North Lanarkshire was to remain in level 3 of the restrictions after threats that we’d be elevated to level 4 which is basically full lockdown again. Skye, on the other hand were downgraded to level 1 which gives them a bit more freedom. Back home Scamp was talking to Jackie in Skye and congratulating her on her freedom.

She, Scamp, had been to Condorrat while I was out and had bumped into Chris Davies’ mum again. Hadn’t seen her for years and then bumped into her twice in a week. Sometimes life’s like that.

It was Scamp’s turn to make dinner and tonight I got to choose between two different offerings. I chose Kedgeree and it was a great choice and a great dinner. Tasty and just nicely curry flavoured.

Today may have been dull, but tomorrow will be wet, WET, WET. Not a Scottish rock band from the ’80s. More a Scottish weather pattern. We may go out, just to get away from the house for a while.