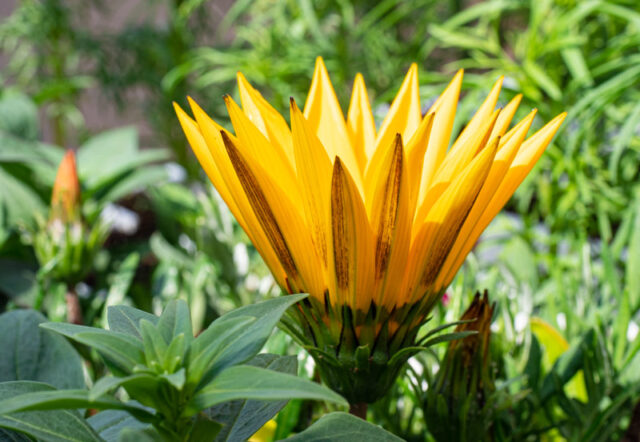 Today we were off to The Royal Botanic Garden Edinburgh.

I didn’t think we were going to have a very special day as were driving along the M9 towards the capital. The mist came down and the sun disappeared for a while, but as we were nearing the city itself, the sun broke through and although the mist stayed for a bit longer, it was gradually being burned off by the sun. I was worried about parking in Embra because it’s a long time since we’ve driven there. We usually travel by train, but that would have meant a drive to the station, train to Embra, bus to the nearest stop to the botanic gardens and then the same again in reverse going home. It was much easier to just bite the bullet and drive. I needn’t have worried, we got parked about 100m from the entrance, plus it didn’t break the bank to park for the whole day. Scamp had printed off our entrance passes this morning (it’s free entrance, but you must pre-book a time slot). We were in and through the gates in no time.

So … where would we go first? That question was answered by a girl just inside the gate who gave us a potted description of the layout of the garden and told us where to go first on today’s adventure. Entrance, as I said was free, but they did ask for a voluntary contribution to go to upkeep. We’d have done that anyway, so were happy to part with a few quid to make us feel better. We climbed the Chinese Hillside first. It wasn’t a strenuous as it sounds. It was about as heavy going as a walk round St Mo’s. Not energy sapping at all. However, the Rhododendron bushes were amazing, absolutely beautiful. Then there were bunches of gigantic blue Meconopsis. Mine failed to make an appearance this year. Theirs were stunning. I won’t go on and itemise every flower, plant and tree we saw. It would bore you and unless you could see it all for yourself it would be pointless. If you’re ever in Embra, make a point of going to see the Botanic Garden. In the three hours we were there, we only saw less than half of the garden.

After a couple of hours we needed a break, so we stopped for coffee. The first time we found the coffee stall, the queue had about fifteen folk waiting to be served. It’s just an outside stall, it looks like the restaurant is being renovated while Covid rules are fluid. We gave up on that first visit, but on the second attempt there were only about six or seven couples in the queue. Scamp went to grab a seat and I went to queue. We just had a coffee each and a scone with butter and jam. That’s where the title of the blog came from. I don’t think we were expecting anything special in the coffee or the scone, but the coffee tasted like coffee and the scones were lovely. Scamp remarked on it a couple of times. I think she’d have been happy with a slice of bread and a cup of water today because she looked absolutely delighted with everything she saw. I must admit I enjoyed the visit too and took 140 photos. Two of which are on Flickr now.  PoD went to a Gazania that we saw in the shop on the site.

After three hours we decided we’d seen enough and rather than spoil the day, we’d leave the other half of the garden to another time. But we didn’t leave empty handed, Scamp got a yellow rhododendron plant a little plant for the garden too. Best part of the day for me was the Meconopsis. Best part for Scamp was … All Of It! And of course, the scones, because they were Lovely Scones!

There was a surprise waiting for me at home. A big box had arrived while we were out, addressed to me and when I opened it, inside was a Venus Fly Trap and a Pitcher Plant. I had said earlier in the year that I was going to get a Venus Fly Trap to catch the little white flies that plagued my chilli plants last year. Now I have them. The Pitcher Plant is actually in the garden just now. It seems to be hardy and safe down to -7ºc. We’ll see. Maybe it will trap slugs too!

Tomorrow will hopefully be a lazy day. We may go to visit the jeweller to get our wedding rings back.