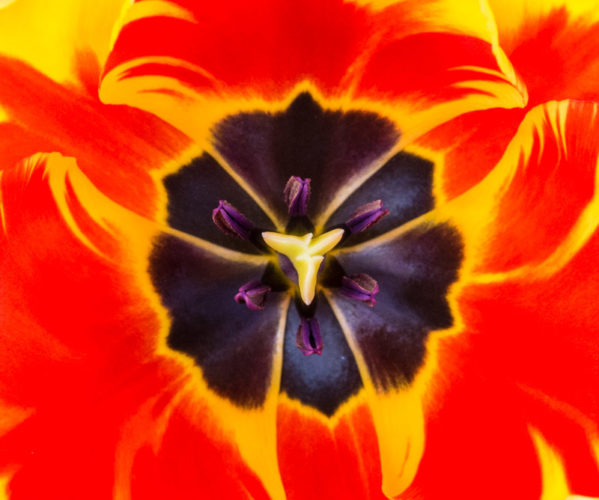 It was sunshine and blue skies when we woke today and it more or less stayed that way all day for a change.

Just on the off chance that today WAS summer, we made the most of it. Scamp was doing the most in the garden, of course. Putting up sweet pea netting, although I did the structural part and fixed the high bits. Pruning the blackcurrant bush. Repotting everything she could find. Cutting the front grass and having great fun blowing the cuttings into the trees. Generally being the gardener. Me? Well, apart from being the designer of the sweet pea frame, I wandered round looking at things and taking photos of the tulips, one of which became PoD. Oh yes and I planted the first batch of Charlotte potatoes.

After lunch I took a load of junk and garden waste to the council tip. There were signs on all the skips to the effect that you weren’t allowed to put soil in them. Why not, and if you’re not to put them in a skip in the tip, where are you meant to dump the soil? If you can’t dump it legally then illegally is the only other option. Then they wonder why people are fly-tipping. Joined up thinking is a step too far for NLC. Anyway, I joined everyone else by emptying the contents of my bag in the skip. “Honest mister, it wasn’t soil, it was compost.”

Back home, I roasted my mutton and put it in the slow cooker for it to do its magic for four hours or so. By then the sun had gone behind a cloud and I sat for an hour struggling with Keyboard Maestro, a really clever piece of Mac magic that allows you to create macros to do clever stuff once you’ve written the code. It was the writing of the code, or to be more exact, the syntax of the code that was messing me about. I gave up after a while and joined Scamp with a G ’n’ T and a book in the garden. It was really lovely for a while, although the sun kept disappearing behind the odd cloud. Veg to go with my mutton (or hogget) was carrot and fennel, sliced thin, fried in butter and then put into the slow cooker to stew in the juices from the hogget. (It tasted lovely by the way. Quite like fennel now.

After dinner and a glass of wine I sat down again, determined to work out how to fix the syntax of the code. Finally I cracked it and this is what it does if you hold down Control + Option + Command and press the ‘3’ key:

Tomorrow looks like it will be much the same as today, if not better, but after that it’s the downward slope into rain and ‘seasonal average’ temperatures. It’s coats-on time again, so we should make the best of it.