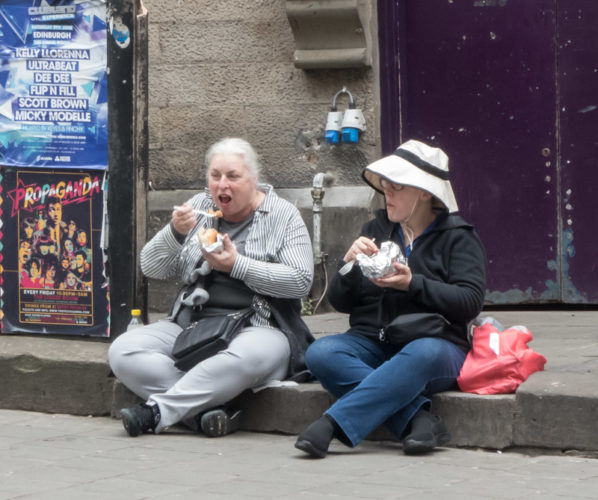 Today we did as we had planned and went to Embra where we found the sun.

We left Croy with the sun completely hidden behind layers of heavy cloud. It was quite warm though, so we shouldn’t complain too much.

Coffee in Nero when we got to the Capital and then a walk through the Farmer’s Market where I bought tomorrow’s dinner, a piece of mutton from Annanwater. I’d bought from them before, so was sure that it would be fresh and good quality. I think I prefer mutton to lamb now. It’s not as light a meat and needs a fair bit of care in cooking, but the taste is that much richer and deeper. (Foodie Speak)

Walked up to the Grassmarket and after perusing the stalls with exorbitant prices for food (well, it is tourist season and a bank holiday to boot) we settled on Petit Paris, the inevitable choice for both of us. Lovely French restaurant run by French blokes where the food, as well as being French is lovely.
Starters:
Green Pea and Garlic soup for Scamp
Pan fried Brie wrapped in Filo for me
Mains:
Fillet of Cod with Mash for Scamp
Beef Bourguignon for me
I even risked Nick the Chick’s anger by having a glass of red wine. When we came out the Grassmarket was mobbed. Tourists everywhere. It looked like a score of tourist busses had just disgorged their passengers and driven off. We walked up West Bow Street which was where I got the PoD of two biddies scoffing their lunch, sitting on the pavement. From there we walked across the Royal Mile and down the steps to the National Gallery. Stood and watched an ok guitarist, piper and drummer busking. Nothing special, but it entertained the bank holiday crowds. This was all done under blue skies I hasten to add. One of the advantages of going to Embra is that because it’s the capital, it gets better weather than the Glasgow area. I think it’s written into a statute somewhere.

Scamp was on the hunt for a new pair of dance shoes and there is a really good dance ware shop on Rose Street, so that was our next port of call. After securing that purchase (to be delivered to the house next week) we dropped in at Waterstones where I browsed the books, but didn’t find anything I wanted to buy. We were fed and fed up by this time, so after a walk through Princes Street Gardens we got the train home. As we travelled west, we lost more and more of the blue sky and it was replaced by more and more grey clouds. Arrived back at Croy and found it as we’d left it, grey, damp and warm. At least we had some east coast sun today.

Watched an ok, but nothing special film ‘Dough’ on Netflix.

Tomorrow should be a better day if the weather fairies are to be believed. Let’s wait and see. Some stuff needs to be taken to the dump, some gardening needs to be done and the bike needs another outing. Also, some mutton needs to be cooked. Hopefully some of these tasks will be completed, and hopefully under blue skies!