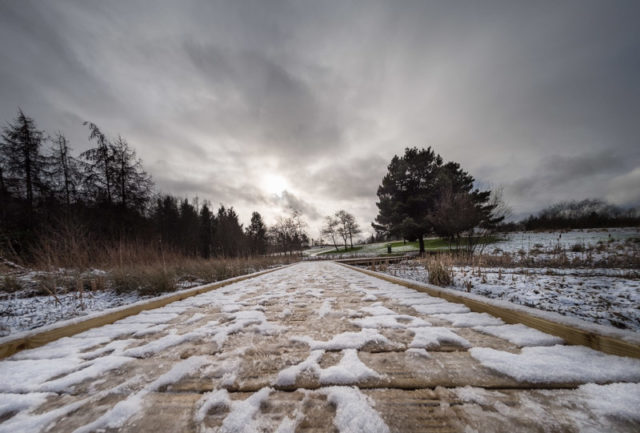 Phone call at just after 9am from the doctor’s surgery to say that the blood I gave yesterday had arrived at the lab without any labels, so could I please donate more. I tried to explain that I have a limited amount of the red stuff in my veins and it would take me a while to replenish my reserves sufficiently for another donation. We agreed a date and time and the receptionist apologised for the problem. I’m sure she’s one of the vampires, because I heard her licking her lips as she put the phone down.

When I looked out the window the ground was white. No snow was falling and the sky was clear, but all around was crisp and even, just not deep. Two out of three will do me for a photo or two. But that would be later. It wasn’t even half past nine and I had a book to finish. February’s Son. Brilliant book.

After my morning coffee and after solving an incredibly difficult Difficult level Sudoku, I went out and cleared the snow from the car and drove Scamp down to Broadwood Farm for her lunch date with Mags. Got some bread and milk on the way home and then went out for a walk in St Mo’s with three cameras. Old EPL 5 with an ultra wide lens. New GX 80 with a wide zoom and middle aged E-M1 with a macro. Surely I had everything covered? Indeed I had. Lots of photos taken and all cameras used. Haven’t picked a PoD yet as this is an early version of the Blog. Happy with what each of them produced though.

Back home again and after lunch which was a piece ’n’ roast beef with garlic and coriander, just to dissuade any more hungry vampires pretending to be from the doc’s surgery. I made some soup. What Scamp calls ‘just soup’. In other words, nothing fancy, just soup. When Scamp arrived after walking back from lunch we finally put the Christmas decorations up in the loft and by that time it was late afternoon and it was getting dark. The clouds had sneaked in when we weren’t looking and taken away all that good sunlight from this morning, but not to worry, I did get some shots to prove I was out in it. The best one turned out to be the view along the snow covered boardwalk taken with the Samyang 7.5mm fisheye. Not your normal, everyday lens, but what it does, it does well.

No plans for tomorrow, we’ll have to wait and see what we get up to.