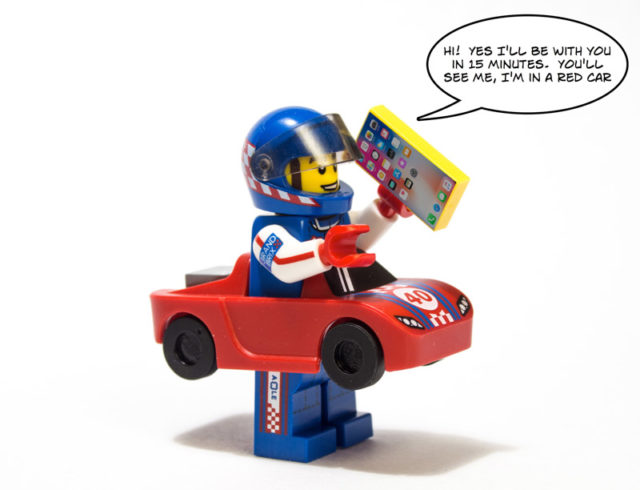 April wasn’t the only month of early rises. We were up and out early today too.

Scamp’s wee red car was going to the car doctor for its annual checkup today. After we dropped it off, we came home to have breakfast and decide what to do with our free day. We settled on a visit to Perth to get some coffee and tea for me. The drive up north was without event and we got parked easily in the town car park. That’s one of the advantages of going midweek, the parking is so much easier. Walked in to town in the sunshine, but with a chilly wind at our back.

After a Nero coffee to sustain us, we went our separate ways for a while. Scamp went to M&S and I went book hunting. First stop was the Oxfam book shop where I usually find an art book or two. Today it was just the one. A book on watercolour. While I was in the shop my phone buzzed. Thinking it was the garage about the car, I answered. The lady on the other end told that according to their records I’d had an accident and I wasn’t at fault. Was that correct? I told her yes that was correct, but I had been killed in the accident. This seemed to be off her script and she asked me to repeat it. I told her I had been killed and I was now dead. I then told her it was my ghost she was talking to. She then got back on the script and I cut the connection. I realise now I should have gone “Woooooo!” Before I hung up. The woman at the till in the shop gave me a strange look and I explained it was simply an ambulance chaser and I liked to have a little play with them before I hung up. The last time I had the same scripted question from an ambulance chaser, my reply was “No, I was completely to blame, that’s why I’m in prison now. Please don’t call me on this number again I only use it to order my drugs.” The woman behind the till laughed and said “Good for you. I must try that some time.”

From the cheap bookshop I went to the expensive one, Waterstones. There was a reading group just breaking up when I went in and they were sitting right in front of the painting books. I did manage to inveigle my way in to get a look at a couple of the books, but then earwigged a conversation about Sourdough. It was when the woman said “… so when I come down the stairs in the morning I look in the jar [of starter} and say ‘how’s may little babies this morning’”. That’s when I knew she was genuine. I told her I’d baked my first successful sourdough loaf yesterday, but that it was almost completely scoffed by Scamp and me. She was really interested and asked how old my ‘babies’ were and I told her they were just over 14 days old and growing stronger each day. I think she was gratified that other ‘ordinary’ folk took up the cudgels of sourdough baking. I wished her luck with her first loaf and went out to find Scamp.

We went and bought loads of coffee and tea, but on the way Eagle Eyed Scamp saw a sale in a sports shop with some natty looking trainers in the window at a knock down price. She just can’t pass on a bargain, so it was with a shoebox in the bag that we walked down to the coffee shop.

Got to the car park and the phone rang. From the garage this time, to say the car had passed and was ready to collect. Perfect timing. When we were driving out of the car park, there was nobody in the cabin and the notice said that as there was nobody to take the fare, please leave the car park smartly. We didn’t need a second bidding. £3 saved is £3 off the price of Scamp’s smart new trainers.

Lunch in Morrison’s cafe and then back south with the weather worsening with every mile. It rained almost half the way home. Not heavy, just there and no more. Dropped Scamp off to pick up the car and came home.

I’d taken one photo today and I didn’t think it was very interesting but after processing it, it looked not too bad. It was a mosaic in the Main Street of Perth. I don’t remember seeing it before. We rarely look down. We rarely look up. We walk with our eyes open, but we don’t SEE what’s around us. We’re too busy making up to-do lists and worrying about inconsequential things we can’t change. We should be more mindful. Today’s PoD isn’t the mosaic, but it is on Flickr. Today’s PoD is the Weeman. It’s been in my head for about a week now!

Tomorrow is dancing in the afternoon, but for the reasons outlined yesterday, we will forego the pleasure of salsa at night.