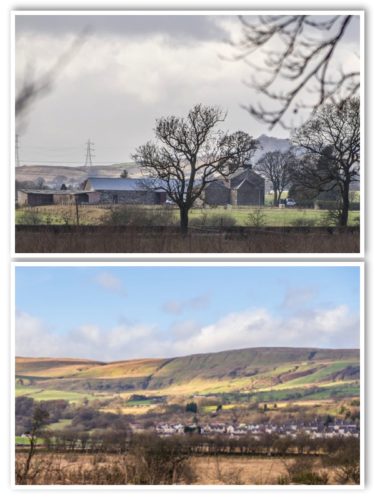 Scamp was at the physio this morning. I started a wee watercolour of the hills at the back, because the light was wonderful with wee floating cloud shadows drifting across them. It turned out better than I anticipated.

I’d taken a frozen chunk of dough out of the freezer last night and left it to defrost and rise overnight.  It did defrost, but it didn’t rise.  I tried to encourage the yeast to start working again by warming the loaf tin in some warm water, but it resisted my attentions. I eventually turned on the heating and put the embryonic bread on the radiator to warm up.

By then, Scamp had returned with her ankle strapped up and we had lunch before she went out to get Gems.  I was swithering whether to go out on my bike, go to the gym or go for a walk.  I’d a pain in my back and any of these would help.  However, as the sun was still shining, I decided that the gym was out, and as there was a gusty wind, maybe cycling would be a bit difficult.  So, by a process of elimination, a walk was the winner.  I was looking for somewhere that would produce a photo and also a sketch.  I finally settled on the railway again, because it’s near the hills and I quite fancied a photo of those cloud shapes on the land.

I got the photo, but saw nothing that encouraged the sketchbook out of

my bag, then I saw the old house that I’d sketched before and that became my SoD (Sketch of the Day).  It’s a strange house, with dormer windows, extensions and an old, old wall round it.  There’s ivy too clinging to the gable end.  The sketch is quite representative, but I think the chimney is a bit out of scale.

Salsa tonight was hard work.  Hard work remembering the moves and hard work keeping going for a full hour after three weeks of lazing around.  Still very enjoyable and although we only stayed for an hour tonight, we may go for two hours on Wednesday, all being well.  Surprisingly, all the moves had names tonight!

The bread?  Oh, it rose perfectly, then it stuck to the loaf tin and just wouldn’t come out.  I should have realised it had its own plans for the day when it took so long to rise.