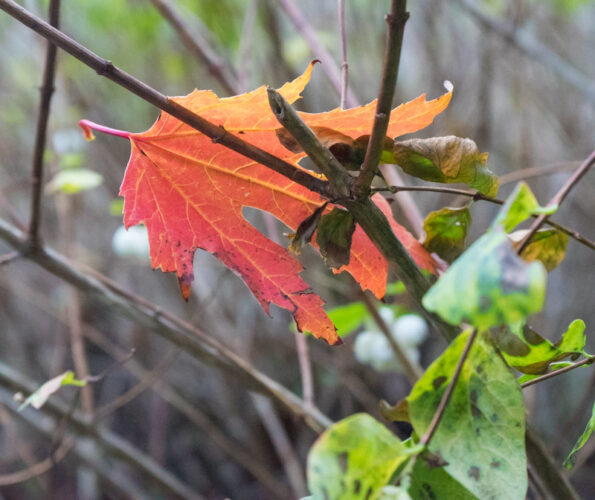 He’s a hard man David. He stands there every day, wind, rain or shine.

We couldn’t agree what to do today. Scamp thought maybe we could walk round Glasgow Green. I wasn’t all that keen. Various other venues were discussed at length before we settled on a visit to Lakeland to get a flan dish for Scamp to make a flan in, strangely enough. That was it settled. We drove to Stirling and found the aforementioned flan dish and also found that Lakeland had fallen out with Dobbies which they used to be joined to. They had lowered the portcullis and were not receiving visitors from that shop. Dobbies had removed their outrageously expensive food shop and replaced it with a Sainsbury’s, which is probably why the portcullis was down. Otherwise the crafty Stirling folk would load their shopping basket at Sainsbury’s and waltz out through Lakeland without paying. I do hope Lakeland and Dobbies patch up their differences and exchange Christmas cards when the time is right. I hate seeing neighbours falling out.

With slightly more than the single flan dish in our bag (and paid for) we headed on to the motorway and up to see David Stirling. He was the man who invented the SAS and his statue is one of the most lifelike I’ve seen. It stands on a plinth with his greatcoat blowing in the wind and a pair of binoculars in his hand looking over to the hills he used for training his commandos in WW2. I had gone there because the view on a good day is tremendous. Today wasn’t a good day, but it gave me a chance to test and compare two camera lenses. None of the photos were going to win any prizes, but the difference in the shots was startling. Don’t worry, I’m not going to say any more on that score. Just let’s say the new camera is a STOATER!

Back home we needed potatoes for tonight’s dinner, so I volunteered to walk down to the shops and get them. On the way back I got today’s PoD which is simply two leaves stuck on a bush. You could almost say they were trapped on the bush and that would lead you neatly on to … 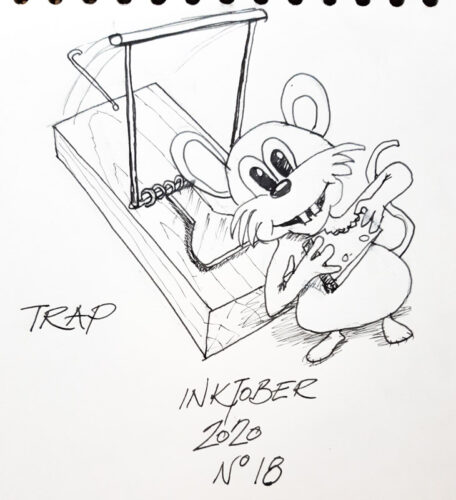 Today’s prompt was Trap and the sketch you see here is my answer to that request. There has been a bit of discussion going on at Inktober 2020 about the relevance of this year’s prompts, and some folk are saying they think it’s a good thing to have vague prompts. They make you move out of your comfort zone. I see where they are coming form with that argument but too many vague prompts make you think of simply giving up.

It was a sad day for me today. I packed up my old trusty D7000 ready to be uplifted by the man from DPD tomorrow to go to MPB to be sold to someone who would hopefully get the same amount of joy from it that I did. Look after the 7000 whoever you are and it will produce great pictures, just the same as it has done for me almost 23,000 times.

Tomorrow, it will be a day of comings and goings photography wise. Scamp is out in the morning with Veronica for coffee at Calders where I’m told not to go because they don’t serve what I would call coffee.

Oh yes, the Flan!! Wonderful. Worth the trip to Stirling to get the dish. Not any good for you Hazy, too many eggy weggies I think!