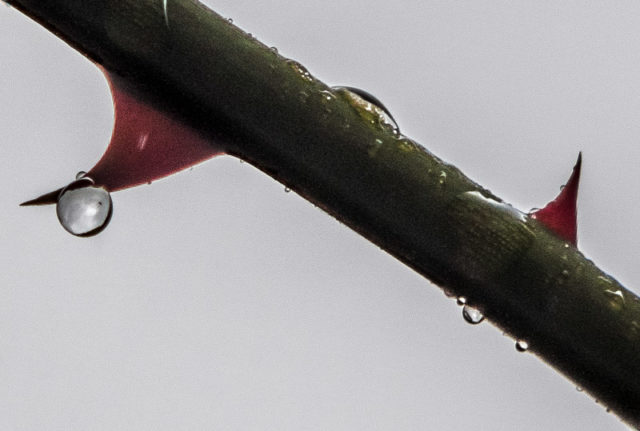 You know it’s a dull day when a highlight is going to the butchers to get some stew. One of those days.

Woke to rain. Scamp went out early to check out a singing venue for Gems and I did very little (as usual). I did take some photos from the back door, and that is where today’s PoD came from. Did you know that rose ‘thorns’ are actually ‘Prickles’. I know a joke about that, but it’s not possible to repeat it in mixed company, but there, you learned something today. Not that I know a rude joke or two, I’m sure you knew that already.  No, it was the technical name for rose thorns! I digress. When Scamp came back, it soon became obvious that the weather was just going to continue in the same vein, so after lunch I got dressed for a bit more varnishing and gave two of the upstairs windows another coat of teak flavour varnish.

When I was finished painting for the day, we went out for a drive and that’s when I got the stew, sausages and black pudding. While I was braving the torrential rain to run to the butchers, Scamp was across the street getting some Scottish Tablet ice cream. After that, we just drove home. It was too wet and depressing to go anywhere else.

Couldn’t decide what to have for dinner tonight. I was almost set on a baked potato and beef burger. Then Scamp suggested why not have mince ’n’ tatties ’n’ cabbage with beetroot (of course, JIC). So with some detailed instruction from Scamp, I cooked the mince and then had mashed tatties and cabbage with ‘roop’ on the side. Brilliant. If there’s one thing that can put a shine on the day, it’s mince ’n’ tatties.  Truly THE highlight of the day. We had the tablet ice cream as a pudding, but there was very little tablet in the mix. Questions will be asked in the house!

So, a day that started off badly and stayed the same through the day, brightened up later because of some boiled potatoes, ground meat, leaf vegetables and pickled root veg. It sometimes doesn’t take much, it’s just got to be the right thing at the right time.

Hoping for some dry spells tomorrow.