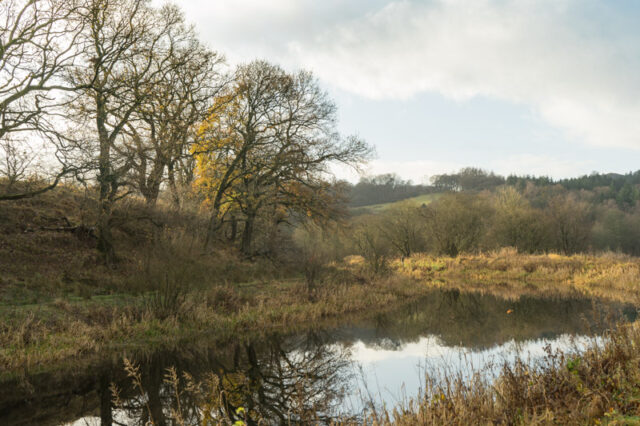 Lovely sunny morning. Too good to waste. Off to walk the canal

Drove to Auchinstarry and walked along the canal passing some folk and avoiding the cyclists. Beautiful light, but low lying cloud on the Campsies to the north. There was very little wind and so the reflections of the trees were almost mirror perfect. Took a fair amount of photos. Even found a bunch of Ragwort looking bright and cheerfully yellow beside the canal and a cow parsley plant still in bloom. Scamp found a wee bunch of white flowers whose name escapes me growing at the side of the path. I’m guessing the vegetation is well sheltered by Bar Hill and the trees that overgrow the canal itself. We had to walk back by the same path from Twechar because our alternative route back by the old railway is still being upgraded. Thankfully fewer cyclists on the way back and only a few joggers. The good light was disappearing too as the clouds merged together.

Back home and after lunch we spoke to Hazy for half an hour and caught up on what’s happening down south. Like JIC she agreed that it’s pretty much life as usual, just a bit duller. We discussed books and she and her mum discussed clothes. It was good to speak to her.

The sun had disappeared when we returned from our walk, but later it started to show its face again, so I put my boots on and went out to investigate the photo opportunities of St Mo’s. They were few and far between and then my camera ran out of film, digital film and I had no spare card, so I had to come home to find I’d missed a call from Val. Scamp was heading off to the shops and I spent a pleasant hour on the phone to Mr Rinaldi, my go-to guru for all things computer. I was intrigued to find that his WD Mycloud NAS had died recently too. I think that settles it. I won’t be throwing any more good money at Western Digital.

Dinner was a delicious plate of Fish Fingers, Egg and Spaghetti. An absolute favourite in the house. Just tasty welcoming food. I had intended to sketch the egg shells for today’s sketch, but it wasn’t happening and I needed to get the PoD into Flickr. A view of the canal from Auchinstarry achieved that little bit of fame. I also needed, still do, to get the blog written and posted. So if you’ll excuse me, I’ll end there and get that done.

If the weather is fine tomorrow we’re going out for a walk. If not we’re not.