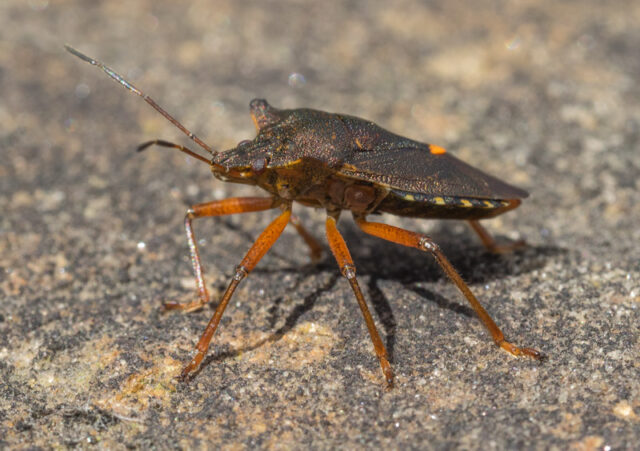 We drove down to Auchinstarry to walk along the canal this morning. Typically, now we are free to travel the length and breadth of the country, we stayed within the 5 mile lockdown limit!

Walked along the canal, avoiding a few cyclists and joggers on a beautiful, if slightly breezy morning. Still didn’t see any kingfishers, but did catch one of Mr Grey’s relatives hiding in the rushes on the far side of the canal. Initially he tried to hide, but then realised it was just a couple of humans out for a walk and totally ignored us. We turned around when we reached Twechar and took the railway path back to Auchinstarry. The railway path is much more sheltered than the canal towpath and as a result we could dispense with out waterproof jackets. Hardly met anyone on the path. When we were crossing the wee stone bridge at Auchinstarry I spotted a Shield Bug and that got PoD. It just ignored me for most of the time, but when I got too close it became defensive and as they have a tendency to fire smelly fluid at you if attacked, I said goodbye and took my leave.

After lunch Scamp went looking for food at the shops while I stayed home and attempted yesterday’s painting, a Ruby Wedding rose that Scamp had cut yesterday to stop it being battered by the gales. It was much more glamorous today picking up the light from the window. I didn’t do it justice, I know that, but this was the best of three attempts and would have to do. It was another catch-up.

When Scamp returned I grabbed my camera and went looking for more subjects. Found a Burnet moth behind St Mo’s school. First one I’ve seen this year. Didn’t get a chance to count its spots, just took its photo.

Tonight I did today’s sketch which turned out to be a still life pencil sketch of two apples. One of my favourite subjects, but, again, not very successful. I’m intending keeping the Lockdown Library going until we’re sure we’re out of it or until I reach my limit.

Another sketchbook filled tonight. May go looking for another one tomorrow. Otherwise no plans. Depends on the weather.