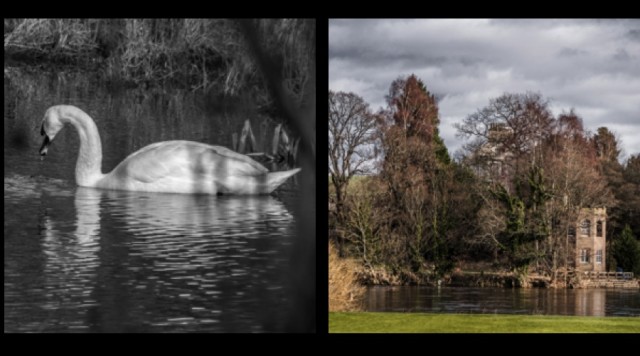 Since it was a bright cheery day, we went to Perth. We had intended going on the bus, but going there was fine, but coming back was a bit of a hit and miss – with our luck it would be a miss, so we drove. It was a really pleasant run up the A9. The scenery with the changing light on the hills was spectacular. We get so used to seeing this scenery in Scotland and we become partly blind to it. I think it’s because we’ve had such poor weather and light recently that we enjoy the world around us when the light returns.

We had come to Perth to get coffee and tea, well, I had come for these essentials as it’s only me who drinks tea and mostly me who drinks coffee. We went for a walk along the Tay and that is where I saw the swan in a newly formed pond created by the recent floods. It was also where we saw the tower on the far side of the river. I think it was really a bit of a folly.

Lunch in Howies restaurant as we hadn’t booked Cafe Tabou so there was little chance of getting a table.

Scamp wanted to look at handbags on the way to the coffee shop and I spotted what looked like a decent pair of shoes in the same shop. Tried them on and decided on the spot that they were fine. Scamp beat me, she got a pair of shoes and the handbag. I wasn’t too bothered because I liked my shoes, they were a bargain at the price and there were no handbags that I liked. I got my caffeine requirement and we drove home, all in sunshine. It’s forecast to rain tomorrow. What a shame.

When we came home I struggled again with that bloody Nexus 7. I’ve decided it can’t be fixed. I’ve tried everything I can. I think someone has been at it before me and without knowing what they have done, I can’t undo it. I’ve learned a lot in the process though. Mainly, leave well alone when it’s been bodged by somebody else.