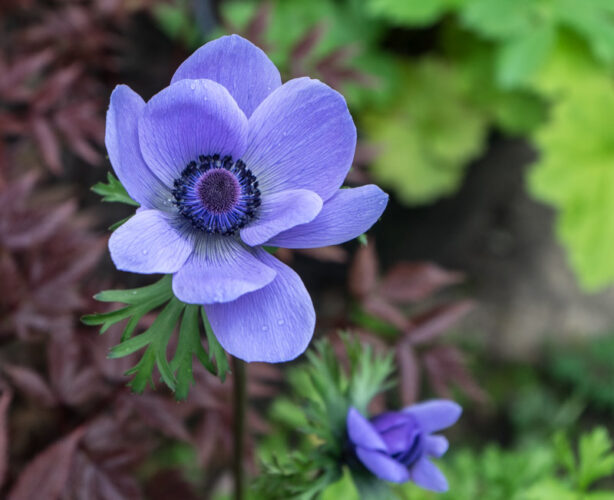 It was promised for 11am and at 10.50am the first drops fell

Today was dry when I was making breakfast around 8.30am. It was cloudy and it was dull, but it wasn’t raining. I checked my weather app around 10.15 and it was predicting rain at 11am. Later I went out to photograph today’s PoD which is an anemone which is sitting on the back step and when I looked closely there were raindrops on the petals. Two quick shots and that was enough for me. They looked sharp and there wasn’t any reason to hang around. Went out front to collect the empty bins, Thursday being bin day, and when I was coming back in it was definitely raining. I checked my watch and it was 10.50am. Rain arrived right on schedule. Fifteen minutes later it was coming straight down. Glad I got those two shots when I did.

The rain did go off again for a while, but in the afternoon we went to Calder’s garden centre to get a plant Scamp had liked the look of earlier in the week. She didn’t have time to buy it then, but she got it today. When we came out of Calder’s it was raining again. To be fair, all of the foregoing was predicted by the weather fairies yesterday and for once it came true.

That was about the end of our activities for the day, although our electricity went off for almost an hour just before dinner time. We’re in a warning listing with the electricity company and we always get an automated call when something like this happens. They were predicting a two hour delay before it would be connected, but the lights came back on after an hour. Luckily we both had fairly well charged laptops so we could continue to play games and fritter away some time without power, but without internet it was a different story. Scamp was resourceful and used her phone’s hotspot to save off the work she was doing to the cloud. It’s amazingly useful to have a decent phone and a bit bandwidth to do stuff like that nowadays. Who’d have thought twenty years ago that power like that would be at your fingertips.

Strangely I was just about to download the new Lightroom/Photoshop bundle when the outage happened, so it’s not installed yet, in fact it isn’t even downloaded yet. Maybe tomorrow. 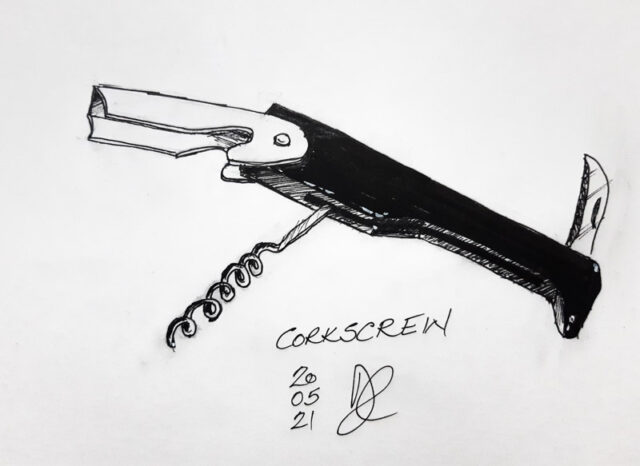 Today’s sketch prompt was for a corkscrew. I drew the Waiter’s Friend we keep in the drawer in the kitchen. Probably the best corkscrew I’ve ever used . So simple and easy to use. A true design classic. The problem with classic pieces is that everyone knows what they look like, so your sketch has to be fairly decent. Mine is reasonably accurate, but not exact. It looks like the real article and that’s good enough for me.

Tomorrow we may go shopping to Stirling or Falkirk. We’ll maybe toss a coin.