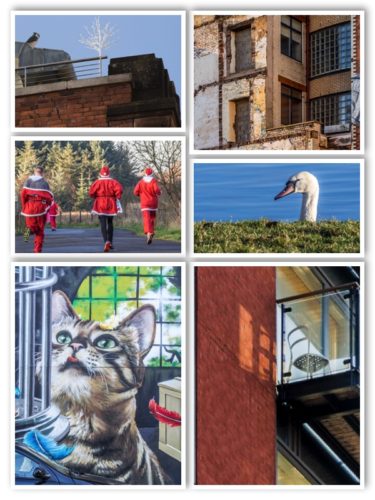 We were driving into Glasgow when we saw a sign:   “Warning! Santas Running”  Hmm.  Looks like a Santa run.  I couldn’t pass up the opportunity of a PoD and that’s how it turned out.

After checking with the NLC volunteers, it turned out that the fun run had just started, but as we were about halfway round the course, we had a while to wait before the first runner, oops, Santas arrived.  These aren’t the real Santas by the way, but are some of his fleet footed assistants.  Having said that, Santa was only a few miles away in Falkirk yesterday, so I wouldn’t put it past the old fella to have sneaked in to the fun-run.  We watched for a while and Scamp got into the spirit of things and was happily cheering them on their way, while secretly wishing she’d heard about it earlier and had managed to wangle a Santa suit and an entrance number for herself.  Me?  I’d hold the jackets.  Lots more Santa pics on my Flickr page.

Once I’d got a few photos and was sure I had at least one contender for PoD, we drove the rest of the way in to Glasgow.  Scamp had the bright idea of parking at Cowcaddens and getting the Subway to St Enoch’s.  A stormer of an idea as it turned out when we saw the queues for different parking places around the town.  Just to clarify, Glasgow is a city, but it’s always been known as The Town or more likely, The Toon.  After we’d wandered round what is, apparently, the Medieval Part of Glasgow, down by Clyde Street and I’d taken some photos of extremely non-Medieval buildings, we had a coffee and headed for home.  Glasgow on a Sunday in December is no fun.  It’s full of shoppers and disappointed looking foreigners hoping to see men in kilts everywhere.  Thankfully the ‘Bastard Drummers’ were nowhere to be seen or heard.  Not even the mad “Bowie & Bolan” bloke who neither sounds nor looks like Bowie or Bolan was in evidence.  Thankfully again.

Came home and relaxed for a while before getting ready for the Sunday Social.  The highlight of the week for us.  Had a great time as usual and met an old friend (Kul) there, once we managed to get parked – nightmare during panto season – and basically that was it for Sunday.  Beautiful day with plenty of sunshine, although a bit cold.  Currently 0.3ºc with snow forecast.

Tomorrow is Monday with all the hustle and bustle that Mondays bring.