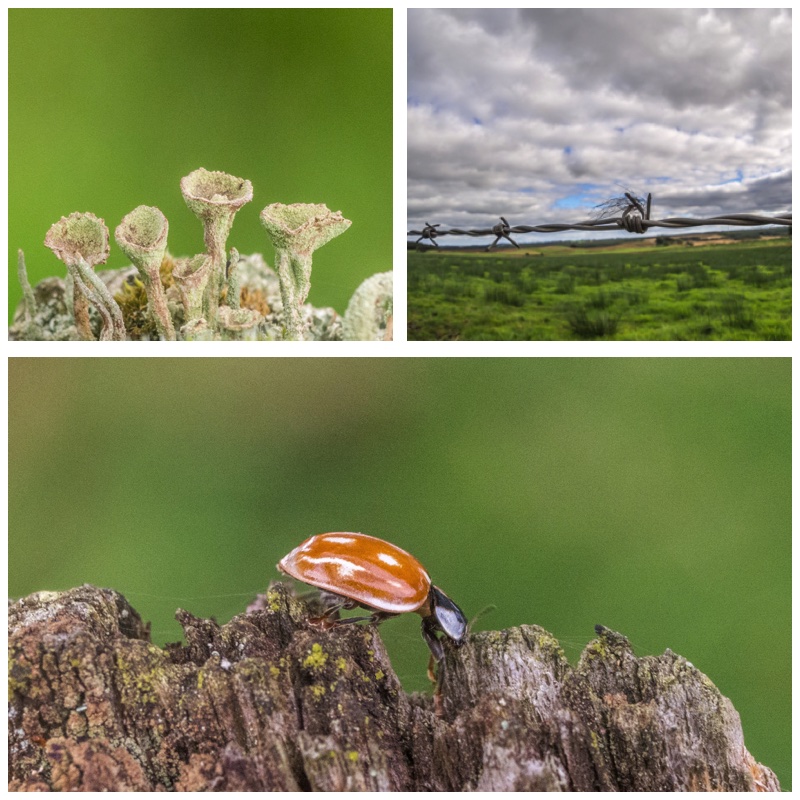 Met Fred and Val and sorted the world out again over a couple of coffees. It’s so easy, repairing all the wrongs of the world. If they’d only ask us, we could fix all the problems in no time.

After that went for a drive round the outskirts of our wonderful town looking for something to photograph and found a few things.

They don’t sound interesting, but when it’s a sunny day and you’re just out taking your time and enjoying the scenery, they are interesting things to photograph.

The Ladybird was orange with white spots and apparently it is rare in Scotland, but quite widespread in England and Wales. Also, it feeds on fungus rather than on insects like aphids.

Cladonia lichen or ‘Grey Trumpets’, also known as ‘Golf Tees lichen have fascinated me since I started taking macro photographs. They look so alien.

The Cow Hair needs some explanation. I was wandering around looking for something to photograph when I disturbed a black bodied dragonfly it buzzed round me a couple of times and then flew off, but I could still hear its wings clattering. (They sound like cellophane being crumpled. Strange description, but that’s what it sounds like to me.) The next thing I knew, it landed on my shoulder. Now what I should have done was take a ‘selfie’ with my phone. “Here’s me with my mate, the black dragonfly!”, but what did I do? I swiped at it and it flew away. Numpty. Then I saw it again sitting on a barbed wire fence, just across the road. As I cautiously approached it, it didn’t move, which is quite strange behaviour for inquisitive creatures like dragonflies. You get the feeling they are watching you when you are watching them. It was only when I got closer, I noticed that my ‘dragonfly’ was a tuft of black cow hair caught on one of the barbs. Despite my disappointment, I photographed it and quite liked the finished result from the fisheye lens.

Salsa tonight was energetic and a great deal of fun. I was dreading Scamp wanting to go to the next class which was ’styling’. Not my idea of fun at all. However, I acquiesced to her suggestion that we “give it half an hour”. We did and it was indeed good fun, interesting and taxing with its concentration on footwork. I can see us being hooked on this in the future.

Tomorrow looks as if it’s set fair but cooler which is a decent forecast for the time of year.