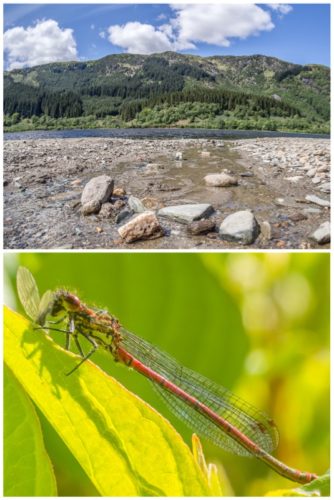 Sunshine again!  Today we went to Loch Lubnaig, just north of the ‘Geriatrics’ Sunday Favourite’ Callander.  We were late leaving and I just knew we were going to run into queues along the route.  First bottle neck would be Dobbies garden centre just outside Stirling – It wasn’t too bad for a change.  Next on the list would be Blair Drummond Safari Park.  It was just as bad as I expected.  All these families eager to see the wild animals.  The queue was quite long, but as I drove past I glanced right and that was where the queueing really started and went on as far as the eye could see.  Maybe it’s the passengers in the cars that would be wilder than the animals by the time they got parked.  I wished them luck.  Strangely, the rest of the journey was uneventful, even Chronic Callander and we got parked at the new lochside parking at Lubnaig without any trouble.  An hour later, things were a bit more frantic in the carpark with cars abandoned everywhere.  People just seemed to park wherever there was a space long enough and wide enough for their car, with no thought of how other drivers were going to negotiate their exit.  They were in their space and that’s all that mattered.  Dobbers!

Lunch was a roll ‘n’ sausage for me and a roll ‘n’ egg for Scamp.  That was the last of the rolls and the last of the eggs.  We got ours and that’s all that mattered!  Loads of people there.  Must have been well over 100.  That’s what happens when you build a carpark at a scenic spot, provide facilities and catering.  If you build it right, people will come.  Think on this NLC.  After a couple of hours sitting in the sun, we decided to head home.  Scamp to do some gardening, me to cycle.  However, a pair of numpties were parked right behind us and didn’t look like moving.  No problem.  I put on my Begbie voice and they shifted sharpish.  Maybe it’s because I’ve just finished ‘The Blade Artist’ which is the story of how Begbie, the psycho from Trainspotting’s life has panned out.  Anyway, homeward through the legions of Grey Hairs out for ice cream and chips in Callander.

Got a few photos of a little red damselfly while out on my bike and Scamp got her pansies planted.

Swallows are flying lower today which means the weather may not be as good tomorrow.