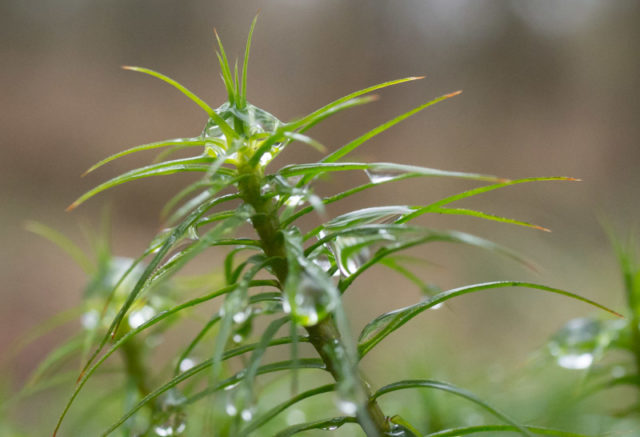 Last night when I went to bed the temperature was just on zero. This morning it was raining, so the temp was in the positive range.

By lunchtime the ice and snow as definitely on the back foot. There was liquid water in the bird bath although there was a decidedly large iceberg sitting in it. After lunch it was back to the ‘leccy cupboard again to investigate and empty the last remaining boxes, most of which contained light bulbs or screws. They were easily sorted, the ‘keepers’ stored and the ‘chuckers’ put in the bin.

That left PoD to be taken. I couldn’t decide what would fit that particular bill and eventually decided to go for a walk to St Mo’s to see if anything there was suitable. The light was poor, so landscape was out of the question. There was ice on the pond but the ducks and swans had managed to cut a hole in it right in the middle, so, well out of range of the 200mm end of the Panasonic zoom. Nothing for it but to rely on a macro. It’s getting like cut flowers and ‘Weemen’, a last resort. That’s what you see at the top of the page. It’s not the best macro I’ve done, but it was a chance to try out a noise reducing setting I’d seen on Flickr. It worked, but was not the great solution that the person seemed to suggest. Maybe I’m just hard to please. Surely not! By the time I came home from my walk the snow had gone and now it’s raining heavily and the temperature is almost 5ºc.

I’d bought a Hogged Shoulder Steak at the farmers market in Embra yesterday and cooked it for my dinner while Scamp finished off the roast chicken we’d bought on Friday. I must say the shoulder steak was delicious. I’ll be looking out for Annanwater at the Glasgow farmers market on the last Saturday of the month. 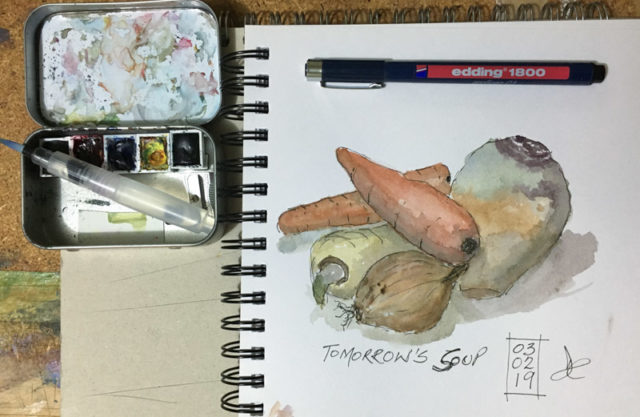 Today’s 28 Drawings Later sketch was of the veg I’m hoping to make soup from tomorrow. Scamp has already boiled the pulses, but as she’ll be busy with Gems preparation tomorrow, I’ll do the dinner. I liked the sketch. Colour needed a bit more saturation, but luckily Lightroom came to the rescue.

Spoke to JIC tonight and got his take on the implications of a no-deal Brexit (how I hate that name!) and dealing with new ‘mental’ neighbours.

That’s about it. Tomorrow is Gems day and we haven’t a clue what we did last week at salsa, so we’ll have to make it up as we go along, just the same as everybody else.