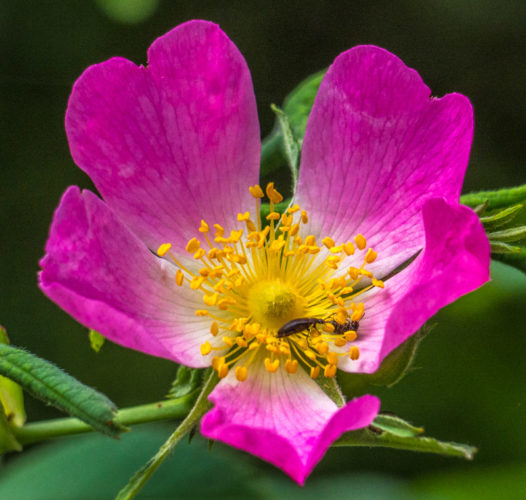 Sunday was a lazy day. Really, it was too hot to be anything else, and after our late night on Saturday a lazy day was called for. Scamp was doing some tidying in the garden and I was just footering around. Although I did prepare dinner which was also a lazy meal: Chicken Tagine. Just fry the onions and the chicken in the Le Creuset (other makes are available) add the spices, some chopped dates, dried apricots, orange juice and water then bung in the oven for a couple of hours.

After lunch I went for a walk down the canal leaving Scamp to garden and keep an eye on the tagine. Walked along the canal, across the plantation and onto the railway road then back to Auchnstarry. That’s where I found the lovely wee dog rose. Got passed by two guys on scrambler bikes, one, just a boy seemed amused that I was a photographer. He seemed to want his photo taken, but I had two extension tubes on the camera and I didn’t really want a macro of his face. Should probably just have taken it. He’d never know. The other guy, maybe his dad was a lot more sensible and just gave me a wave as he passed. Such a lovely day to be out walking in your shirt sleeves. 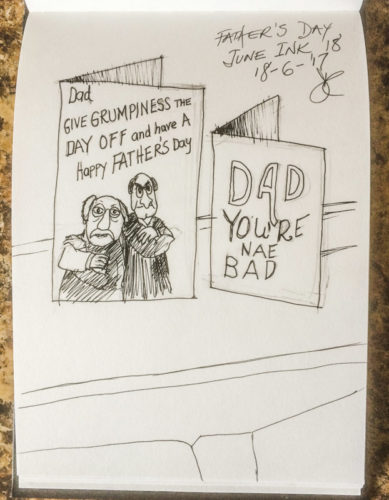 When I got back, I’d just missed JIC, so I phoned him back and we compared temperatures and had a quick catch up. Then I let him go to prepare his barbecue. Hope it worked out well J. You’ll see his card on the left above. Don’t know where he gets his sarcasm from! Hazy’s is on the right with your recommended text alteration. Hope you approve H.

We couldn’t decide whether to go to Sunday Social or not. We’d been out late dancing on Saturday. We’d have usual salsa class on Monday. Can we be bothered? Will we, won’t we? Eventually we decided; stuff it, let’s go. Driving this time. We’ve learned our lesson with trains.

Got parked no problem and had a great time at Arta. I’m beginning to like it. It’s more ‘grown up’ than The Garage. It’s just a bit dark and gloomy. Danced with four girls as well as Scamp! Feeling the effects of it now on my knees. Chicken Tagine was voted good by the Cumbersheugh jury, but both of us agreed that it was too sweet. Less fruit next time.

Preparing for another hot day tomorrow.