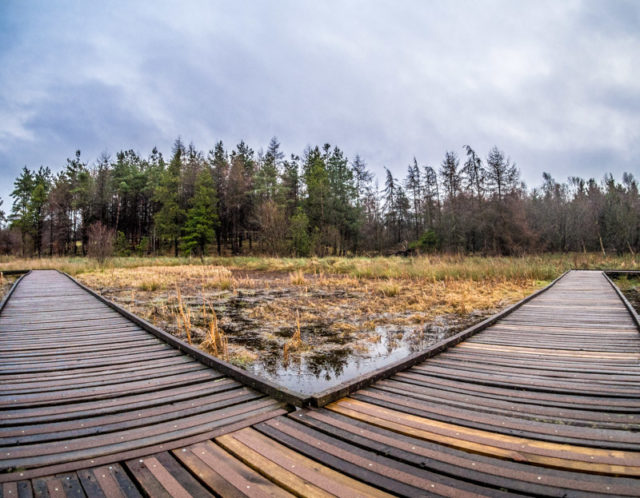 The highlight of today was taking the cardboard boxes and the bottles to the recycling centre. Yes, it was that sort of day.

In the morning I made that drive to the recycling centre. It would have been easier if we had been supplied with a green bin (for glass) back in October when we were promised it, but we weren’t, so we had to load the car up and drive there. Everyone else was there too, but I had a smashing time dropping bottles into the big containers and listening to the crashing sounds they made.

After that, and after deciding what we’d have for dinner, we had lunch. Then we went to Tesco. Scamp drove and we filled the car with all the stuff we needed for the next few days, mainly food. When we got back I found some stew in the freezer and set it to defrost while I grabbed a last hour of daylight in St Mo’s. That’s where I got today’s PoD which is an ultra wide-angle view of the pond and the boardwalk. It’s just an ordinary pond, but the ultra-wide makes it look like something special I think.

All the time we’d been checking on H&N’s second leg of their journey home. They were leaving the relative calm of the midlands and heading for the stormy zone around London, but we soon got the message that they were home and the cats had been collected and they too were home.

Dinner for me was stewed steak with potatoes, turnip and carrots. Substitute haggis for stewed steak and you have Scamp’s dinner. My thanks to Scamp for the clear and concise instruction on how to cook the stew without burning but with added flavour. Next time I’ll try to fly solo.

So, the highlight of the day really was smashing the bottles in the recycling bin. A close second was finding that the stew was beautifully tender and tasty. It was also good to know that H&N arrived home safely.

Tomorrow we may go to the gym or to the pool for a swim. Also, the other pair leave Tobago and the sun to face the long flight home. Glad you got a few dry, windy, sunny days after all that rain.