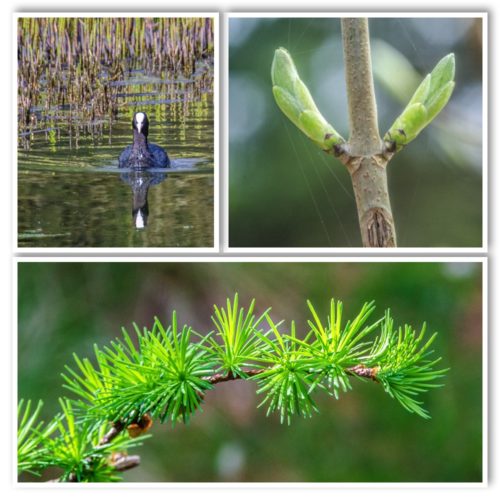 Another early rise this morning to go, not for a walk over St Mo’s this time, but to Tesco for muesli which I fancied for my breakfast.  A lovely morning with bright sunshine although the weather fairies depressingly predicted clouds drifting in from the north.

After that bout of energy, and after breakfast, Hazy Skyped for a while.  By then it was about lunchtime, or should that be ’dinner time’ (all will be explained later 1 ).

After dinner oops, lunch, I settled down to watch episode 1 of Lucifer.  Brilliant.  Such deadpan humour.  I might even extend Prime, just to watch it.  Thank you for the heads-up Hazy.

Then the man came with the greenhouse.  It was a dawdle to set up and it was soon in its place in the garden after digging up the roots of an old bush and levelling the ground again to move the magnolia tree.  It’s not an enormous greenhouse, but it is green and has a ridged roof, like a house, so it’s a green-house and now has a few plants in it.  Planted seeds of  English basil, and some English peas.  Still to plant the English beetroot.

To ensure we did have even more plants, we went to B&Q and bought some seedtrays and a pot of flowers.  While we were there, I went to Currys.  I’d been last week to see if they had cheap bluetooth keyboards to use with my Linx 10 tablet.  They did have, but when I took it to the till, two assistants were serving one customer while a queue formed.  The store manager seemed to be enjoying berating a junior employee quite loudly in the middle of the store.  I got fed up and went to return the keyboard when he said “I’ll take that over at the other till sir.”  I told him he was too late, but he didn’t seem concerned.
Today, I relented and decided that last week was a one off and went back to Currys to get the keyboard.  This time when I took it to the till, the assistant was on the phone trying to get some issue for a customer cleared up.  Again a ‘manager’ was standing in the middle of the store, this time watching a video on a man’s laptop.  It did not appear that this was a problem he was solving, in fact it looked like a couple of friends discussing something.  Again, I gave up after a few minutes.  Walked past the ‘manager’, yes, he did have a badge on with his title, put the keyboard back and walked out.  Not a word was spoken this time.  Don’t they want sales in this shop?  Harrumph!

Went to St Mo’s when I came back.  Got a few macros and that was it.

Tomorrow is Friday and that might mean a day In The Toon.  Perhaps.