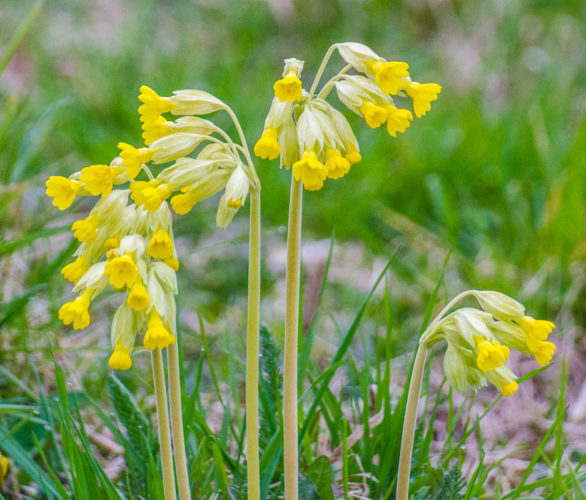 Woke early and couldn’t get back to sleep.

Eventually I gave up and went out for a walk to St Mo’s to see if the deer were awake.  Of course they were and they were way ahead of me on this dull drizzly morning.  Actually it wasn’t a drizzle, it was a smir.  That typically Scottish word that describes what rain is when it isn’t actually raining.  It was as if the rain thought it should be doing its work, but just couldn’t be bothered.  I couldn’t see much worth photographing, so I headed for home and breakfast, then I saw the yellow flowers.  I couldn’t remember their name, but the colours were interesting.  Took a few shots using the spot metering again on  the Nikon.  Almost home, I remembered they were Cowslips.

The plan for today was to buy the materials for the duckboarding we were going to use to replace the old flower box at the back door.  After breakfast, I was just thinking I should get going to B&Q when it appeared the rain had decided to fulfil its task and started to move from smir to drizzle with the possibility of actually raining some time soon.  No point in getting the materials and then having to leave them out in the garden, so I left it until later and went to finish a sketch I’d started down at JIC’s.  Finished the sketch and didn’t like what I saw, but the rain had stopped, so I drove to B&Q and got the wood.  Even sawed it to size and realised I didn’t have nearly enough, so it’s back to B&Q tomorrow for more decking timber.  It’s a work in progress, that’s all.  Not a big deal.  Now, years ago I’d have drawn the whole thing out in AutoCad or Inventor and modelled it and that would have taken a couple of days getting it just right.  Much quicker and easier to cut a mock up and decide if that will do the job.  Maybe I’m learning, but I doubt it.

We both went to salsa tonight and thankfully it was Jamie Gal and not Colin.  The class was interesting and full of humour, as it should be.  Unfortunately there were quite a few missing because of Colin’s Cha-Cha class last week.  Such a pity.

I’ve been trying out Spotify, finding lots of music I’d forgotten about.  It might be a strong contender to replace iTunes, especially if Apple really are phasing out iTunes.  It wouldn’t be a bad thing in my opinion because that bloat monster is becoming worse with every new version.

Tomorrow the mini greenhouse is due to land on our doorstep.  Let’s hope Scamp can put her jigsaw solving skills to the test in building it.

Blog title refers to a book by Kate Atkinson