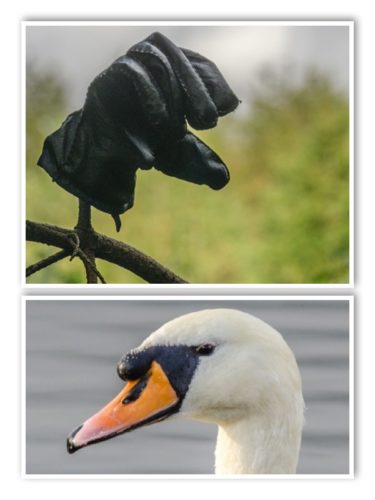 They promised us sunshine.  I think they must have had their fingers crossed behind their backs.

It started off dull, but we were expecting that.  We knew it would brighten up around midday.  However, when the wee hand was at 12 and the big hand was also at 12, the weather was much the same.  It stayed that way with the occasional bright spell through the afternoon.  I risked a half hour walk later in the afternoon and got a fairly decent portrait of a swan and a shot of a ‘Black Panther’ salute from a bush before the rain put an end to play.

Drove in to Glasgow in bright sunshine, but the sun was low and distracting.  One of those days where you wish it was dull like in the morning.  It might be boring, but at least there’s nothing to blind you.  Salsa was very energetic and very, very enjoyable.  I think Scamp was wondering what was coming next a few times when I started to string two or even three half moves together in a sequence.  It must be really hard being a follower at times. 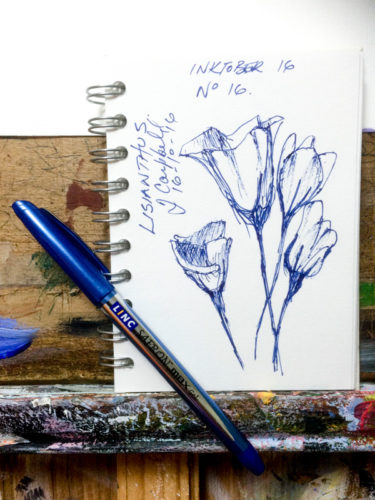 Tonight’s Inktober sketch is of some Lisianthus flowers in a vase on the table.  I keep wanting to call them Lissajous which are a totally different kettle of fish.  As far as I can remember, they were produced on an oscilloscope when we were studying AC current at college, back last century some time.  Google it, that’s the best idea.  Anyway ‘flooers’ as I call them are sometimes a picture of last resort, but these ones were quite a challenge.  Pen was a blue Linc Saffron from the Pound Shop.  Quite high quality rollerball pen, made in India.  It has a tendency to smudge when wet, but dries to a water resisting finish, at least the black does.  I’ve been using them for years now.  If you see them on sale, buy a pack.  A pound well spent.  Paper was my favourite Pink Pig sketching book.

Not sure what to expect from the weather tomorrow, but hopefully it will be better than today.