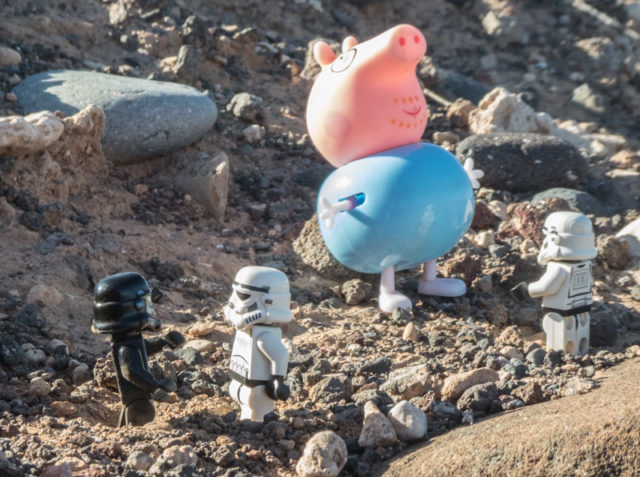 After breakfast we walked down to the island to have a jug of sangria and pose in the sunshine. It wasn’t until we were on the bridge, watching the spotted or striped fish, it was hard to tell which, swimming beneath us, it wasn’t until then we realised that the wind was the killer today. The sun was warm and the sky was fairly clear of cloud, but the wind was cooling us down very quickly. When you hear the term ‘wind chill’ you think of snow and ice, not twenty something degrees in the sun, but the chill effect is still there and I was feeling it. Scamp wasn’t so bothered, but when we got to the island cafe itself, there isn’t much shelter there, especially when the wind is from the south as it was today. We walked a circuit of the round cafe building, then regrettably left. Too cold in Fuerteventura in March, who’d have thought it.

To lift our spirits (no pun intended) we walked up to the Spar shop in the Atlantico centre and bought another bottle of gin and some tonic. We also bought some spicy pimenton for cooking when we got home and the cheapest saffron we’d ever seen. Again the intention is to leave it in the cupboard and then take it out some day to make paella and remember the day it was too cold to drink sangria in the Canaries!

Had lunch in the hotel and afterwards, Scamp wanted to do some more sunbathing in the shelter of the gardens in the hotel. I took the Troopies for a walk in the wilderness to get their photos taken. That’s them at the top of the page the PoD.  Have you ever tried to take a photo of three troopies and a Peppa Pig in a gale force wind?  It’s not easy.  Oh how we suffer for our art.

When we both returned from our last outing on the last day, we started packing, with a little gin ’n’ tonic, to lift our spirits (N.P.I.)

After dinner we went to the entertainment team show. It was dire. Not funny at all. Dancers who couldn’t dance. Singers who couldn’t sing. Jokes that simply weren’t funny. We didn’t stay to the end.

Sat on the balcony and drank too much gin again to, you’ve guessed it, lift our spirits, and that’s why the blog was late.