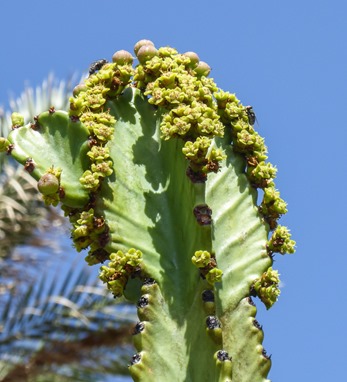 It’s Thursday today and that can only mean one thing.  Thursday Prezzies.  Scamp had chosen her prezzy and in late morning we walked to the shops.

That was after we lazed for an hour in the shade beside the pool.  I got fed up lazing and went to get some photos in the garden.  Saw a dragonfly, but it was doing circuits again and didn’t stop.  Sometimes it slowed down to tease the fish in the stream and let them try to catch it, but it was far too fast for them.  That’s where the PoD came from.  It’s a flowering and fruiting cactus complete with Spanish greenbottles.  Like bluebottles,  only green.  Still tired of lazing, I did some sketches of the folk lying on their sunbeds.

With one in the bag, we decanted ourselves from the sunbeds and walked down the road past the Sheraton to the first row of shops.  Had lunch (burger for me, tuna club sandwich for Scamp.)  The beers we had quenched our thirst.  Got the prezzies then walked back along the ‘new’ walkway.

I had intended going for a walk to get some more photos and Scamp was going for a swim, but then there was a power outage.  We didn’t fancy going down five flights of stairs, or worse, having to climb back up them again if the lifts weren’t back in business, so we waited on the balcony and had another G ‘n’ T.  By the time the power returned it was too late to go for a walk, so we went for a swim instead.  I tried out the ‘adult pool’ and it was COLD!  Freezin’!  However, I was in and I was going to do a circuit of the little island with the jacuzzi in it.  All the while I had the thought of that warm bubbly water, that WARM bubbly water.  Finally completed the circuit and did get a chance to warm up in the jacuzzi.  Scamp joined me although, theoretically she hadn’t earned the treat, her not having swum in the freezing pool avoiding the ice floes.

Walked straight across to the middle pool and it was heated!  Hadn’t really noticed it before, but after the cold pool, this one felt warm.  Swam there for a while before returning to the sunbeds to soak up some rays.  Scamp went to swim in the middle pool.

Came back, fought with Lightroom for a while then went for dinner.  After that, went and grabbed a good seat for Tina the saxophone playing singer who would play some salsa, we hoped.  She did.  We twirled and twisted with the best of them.  Not as clean a demo as last time, but we have the G ‘n’ Ts and the Rum ‘n’ Cokes to blame for that.

Exhausted now, I’m sitting on the balcony with the waves crashing on the shore wondering what we’ll do tomorrow.  Maybe a trip to Caleta?  Maybe hire a bike and go for a run?  Maybe go and have lunch on the island?  Maybe some, but probably not all of the above.