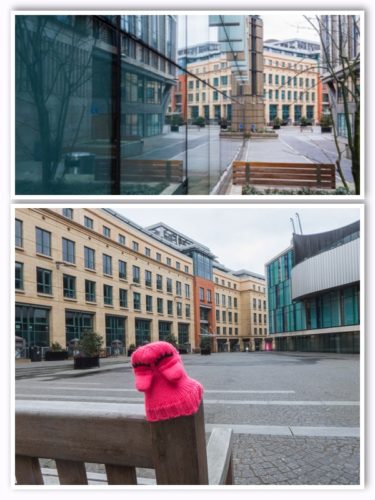 Today we got up early and drove to Croy to catch the train to Embra, but a surprise was in store!

I’d like to say that the coaches were shining, sparkling and new, but they weren’t. They were someone else’s castoffs. You can’t expect Scotrail to pay for new platforms, new overhead power lines AND new carriages, be fair. Still the journey was smooth, comfortable and slightly slower than the old fashioned diesels. They did however get us to Haymarket much quieter than the old ones did.

I’m always a bit disappointed when I come out of the station at Haymarket. There is never a market there and very little evidence of hay. Is it like a Farmers Market which only arrives one or two days a month and we’re just not in Embra on those days? Perhaps it’s a sort of hidden, secret market that’s down an alleyway or round a corner and you need to know the password to be allowed entrance. Not that I’m at all interested in buying hay, it’s just that I hate the thought of missing out on something.

We walked up for coffee at Nero and on the way I saw today’s PoD just sitting there in front of me. The softness of the child’s bright pink woollen glove stood out so well against the clinical lines of the architecture, I just knew it would be PoD. I’d earlier taken the shot of the reflection of buildings, but the pink glove was the winner, by a mile.

After Nero, we walked down to Princes Street (No princes in evidence today) and on through a few shoe shops with no resulting purchases by Scamp, then up on to the Mound and across the Royal Mile to the Grassmarket heading for Tony Singh’s restaurant there. That was the cryptic message on yesterday’s blog. Not Ravi Shankar’s, but Tony Singh’s. However, it looked as if it was Under New Management because there was little evidence of Mr Singh’s sense of humour in the menu. It all looked very bland. Disappointed we crossed the road to Petit Paris where we knew from experience there was good wholesome French fare available, and so it turned out. Scamp had Courgette Soup and Poisson de Jour (Coley) and I had French Onion Soup and Plat de Jour (Toulouse Sausage) washed down with a glass or red wine, risking the wrath of the Scottish drink driving laws.

After lunch we wandered back down to Princes Street and walked through what used to be called the German Christmas Market, but which is now more likely to be the Polish folk selling Chinese copies of German artefacts. However, it was bright and cheery and everything was half price which must be a sickener for those who bought their Chinese knock-offs last week at full price. We didn’t buy anything, we were getting cold, so we just went for the rain home.

What a disappointment. It wasn’t a ‘leccy train, it was an old noisy diesel. What was worse was that it wasn’t seventy coaches long, just three. I felt we’d been sold short. However, the up side was that it was warm and it was a faster journey that the one in the morning.

Tomorrow it’s a Sunday Social Day, so we’re hoping to be dancing!