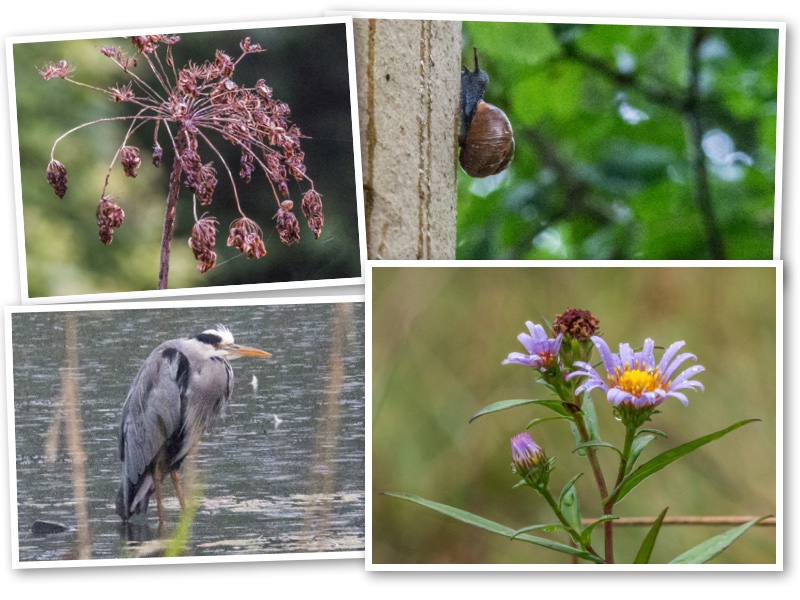 The plans to go swimming this morning didn’t come to fruition.  Perhaps tomorrow.  I did go to the physio and he was quite impressed with the improvement in my shoulder.  He did however still bend me, shake me and stick the inevitable pins in me to see if he could make me jump.

The day had started out with heavy leaden skies, well, they would be heavy if they were made from lead.  However, when I drove down to the leisure centre, the cloud was clearing and there was a touch of blue sky there.  It didn’t last.  While the physio was pinning me down to the table with his acupuncture needles, I could hear the rain battering on the window. The day was going downhill.

It stayed in that downhill frame of mind for most of the afternoon but by about 4 o’clock I was ready to grab the last little bit of sunshine, because there was some, to get a photo or two.  Actually I got four I was pleased with.  Clockwise from top right:

As you will see from Mr Grey’s picture, it had started raining while I was out.  It was inevitable because as I was walking over to St Mo’s I’d just been complimenting myself on grabbing an hour in the sun taking photos.  Blue sky and sunshine.  I should have known the rain wasn’t far away.