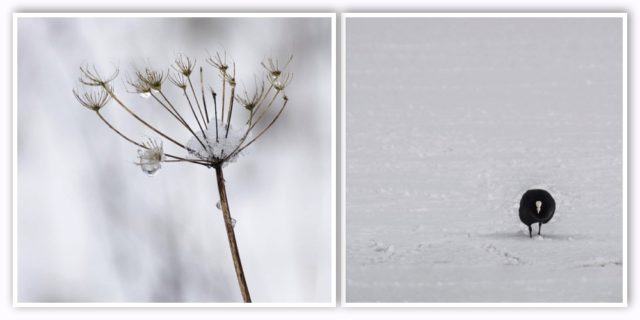 Today was the second, and final leg of H&N’s journey north, and it was snowing.

The snow lasted all morning before finally petering out around lunchtime. Scamp had been a bit on edge until it actually stopped then she settled down, knowing that the worst of the weather was past. Even so, she was still determined to dust, Dyson™ (that’s like hoovering but posher), clean and polish the house at least three times until she was sure it was fit for visitors.

After lunch I went out for a walk in the snow around St Mo’s. That’s where I got today’s PoD of the coot on a mission. It was also the first time I used Picktorial in earnest. That’s right, I bought it last night, just before my demo time ran out. It really does work a lot faster and with a lot more variables than Lightroom. The only thing it doesn’t do is Asset Management, or Cataloguing as we used to call it. In fact it proudly proclaims that it is Catalog Free. Which is a fancy way of saying that it would cost too much to add in that feature and then nobody would buy it. So it looks like I’ll be using Lightroom to import my photos and do the heavy lifting in the post-processing, then use Picktorial to do the fancy stuff. You know what I mean. The little bits of pixel adjustment that nobody will ever know existed except me. Every photog does it … I think. Or maybe it is just me!

Not long after I came home and dumped the photos in Lightroom, we got the text to say the happy couple had arrived at the hotel and were going to rest from their journey, but would eat with us later. Scamp could finally breathe a sigh of relief, sit down and relax until it was time to start the prep for dinner. On tonight’s menu was Venison Stew or Panfried Sea Bass Fillets followed by Pineapple Snow with Lime and Chilli sauce. Both visitors opted for the venison. A very good choice said the Sous Chef who had spent yesterday afternoon preparing it.

H&N arrived in the middle of a surprise snow shower and we had a great evening opening presents and generally catching up with stories from the far south. They wanted to get back to the hotel and rest, so left fairly early. Tomorrow is a rest day for both of them, and probably for us too.

Tomorrow for us consists of a shopping expedition and little else. It’s nice to have a fairly full house again and all sit round the table.