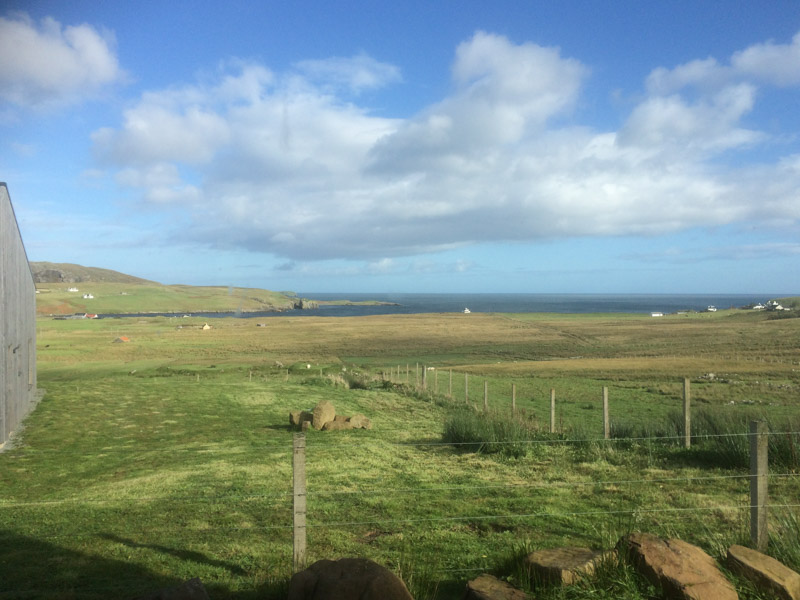 Sitting in the Coffin House in Skye. Having coffee, eating a brownie and gazing at a wide, wide landscape. Scamp is eating something unpronounceable (Pear and Almond Streusel I’m reliably informed!) with coffee. What a place to build your house! Just imagine waking to this view every morning!

At least, that’s where we were. Now we’re in Cafe Arriba in Portree. Globetrotters that’s us.

Or at least we were.  Now the big hand’s almost at 6 and the little hand is heading rapidly towards 12, that’s 12pm!  It’s been a lovely day and I’m trying to catalog it before it becomes tomorrow. 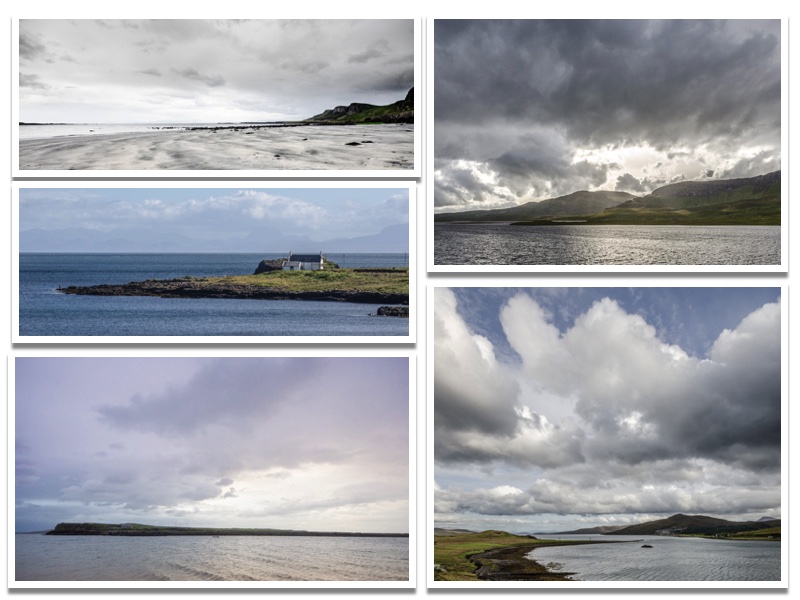 After we left the Coffin House or Turf House to give it its proper name  and to be absolutely perjinct, the house is called the Turf House, but we were in the adjoining coffee shop and its proper name is Single Track.  It’s in Kilmaluig on Skye.  It was Murd who christened it the Coffin House because of the elongated hexagonal plan view of the house itself, although the coffee shop is actually in what is the studio of the house, not the house itself.  They tried to name it Turf House, but to the locals it will always be the Coffin House.  Inside the cafe it’s warm and quite spacious with that wonderful view out to the sea.  I went there hoping to see some of Wil Freeborn’s watercolour paintings, but they were almost all sold.  Only one left and priced at £90 was outwith my pocket money.  I wasn’t all that impressed with it either.  The two ladies who run the cafe were very forthcoming about Wil and told me that the paintings had almost sold out within a week of opening.  His stuff is good, well, I like it.

After Coffin Coffee we went on a run to Aird.  We’d been there in March?  The last time we’d been on the island anyway and found a fairly sheltered parking place out of the worst of the wind and sat there watching the world go by.  Scamp wanted to go there again today and we spent another hour and a big bit watching the world go by again.  I got a fairly decent watercolour done of the wee white house in the mosaic above.  I’d painted it the last time we were there too and I don’t think today’s effort was better.  Only had one interruption by a bloke wanting to get directions to Flodigarry.  We sent him in roughly the right direction, hoping he’d bump into someone who would give him a more accurate road.

When we left Aird, we headed south to Portree for more high jinx trying to second guess what the stupid motorists would do before they did it.  You can never tell when some people want to drive at 10mph through the town, signal left then go right while others are trying to perform a 93 point turn in the middle of the main street with a camper van.  I really do despair of the intelligence of these drivers.  I’m sure they’re the ones who voted Out at the EU referendum.

Lunch was at Café Arriba in Portree and I’m suffering for it tonight.  I don’t want to tell you how many times I’ve been to the toilet.  Maybe the last time for this lunch venue.

After lunch we went to Braes which is out on a headland just south of Portree.  We managed to go on another new road!  Got some photos and came back by a really dodgy under maintained road.  Not very funny at all.  However, we didn’t meet any of the stupids this time … thankfully.

Coming back north we stopped at Storr Lochs and grabbed a few more shots before dropping Scamp off at Burnside and heading down to the shore to get the last few shots of the day.  Saw a strange looking lorry down at the slip with a wide door in the side and what looked like a stage or a catwalk extending from it.  A mobile theatre perhaps?  On Skye??  Got a few shots of Staffin Island and then the rain came on, right on the forecast time.