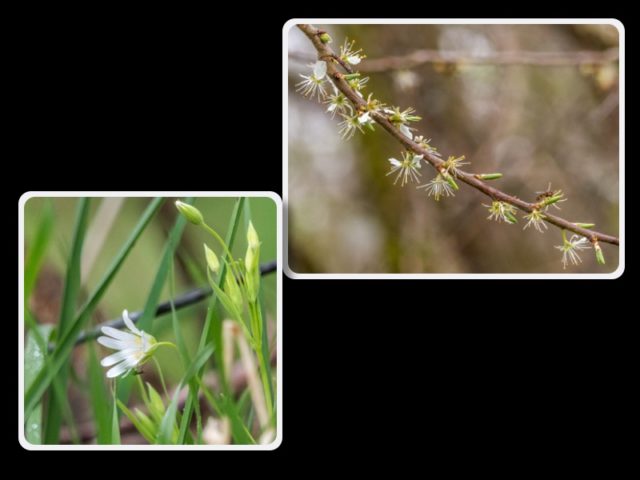 Today was wet from first thing this morning.  Not heavy rain, but persistent.  We took advantage of this to a certain extent by planting our potatoes in their bags.  At least we didn’t need to water them once they had been planted.  Scamp potted up her sweet peas and they are outside for their first overnight.  She also planted out my rocket which I kept meaning to do, but just never got round to.  Anyway, they are planted now.  It doesn’t matter who did it.

Photographically, there wasn’t very much decent light with grey overcast skies, but I went for a walk along the railway to see what was worth taking.  I liked the little branch with the blossom on it and I did see the fly, but I was impressed with the sharpness and the clarity and the fact that it was a colourful little hoverfly.  The second shot was another lucky with another little fly hanging below the white flower (it’s a common mouse ear by the way – the flower, not the fly).  Not as sharp as the blossom or the hoverfly, but still a decent shot.  Check them out on my Flickr page.  To think I drove about 10 miles and walked about 3 miles in the rain to get these shots.  That’s what a 365 makes you do.

Today’s word was ANTISEMITISM.  It has been bandied about on radio and tv since Ken Livingstone made his ill timed or cleverly calculated remark.  It was while Scamp and I were watching the Andrew Marr program this morning that I thought is there such a thing as SEMITISM or is there only a negative version of the noun?  It seems that everybody seems to have an opinion on this topic and everyone is desperate to have their opinion heard.  It’s probably true that those who speak loudest have the least to say.  I will say no more.