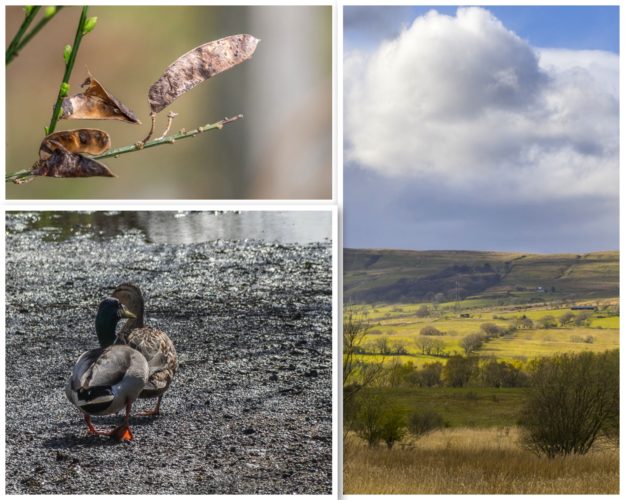 Today was similar to yesterday with intermittent rain showers, but today’s showers were heavier and blown along by a stiff westerly wind. That’s the weather report done. Tomorrow looks much the same.

Got fed up sitting in the house and since we needed some shopping, I took the opportunity to go and get some photos – two birds, one stone, you get the idea. Actually two birds were involved in the photos. Two mallards sprang from a pathside puddle on the old railway and walked quite happily along in front of me. I had my camera ready, focus and exposure set, ready for them to fly off, but they just kept waddling along keeping a weather eye on me to make sure I didn’t get too close. When I did speed up, they did too, but they eventually tired of the game and flew off. It was either that or they were deliberately leading me away from their nesting site. That could have been the answer to their strange behaviour. After that the rain came down in torrents and there was nowhere to shelter, so it was just a case of grin and bear it. By the time I got to Dumbreck marshes the rain had passed and the sun was shining on the Campsies. Had a quick scout around to see if any deer would show themselves, but as I was upwind of them, there was little chance of me surprising them. Then the next shower hit and this time I did get a bit of shelter under some pine trees. By then it was time to head back and that’s where I saw the textures on the Broom seed pods. I liked the twisted pods which for some reason remained dry in spite of these showers.

Driving back home I got caught in a long and heavy hail shower. I’m glad I was in the car when that came. Wouldn’t have liked that stuff stinging my face.

Like I said, more of the same forecast for tomorrow. Oh what fun!