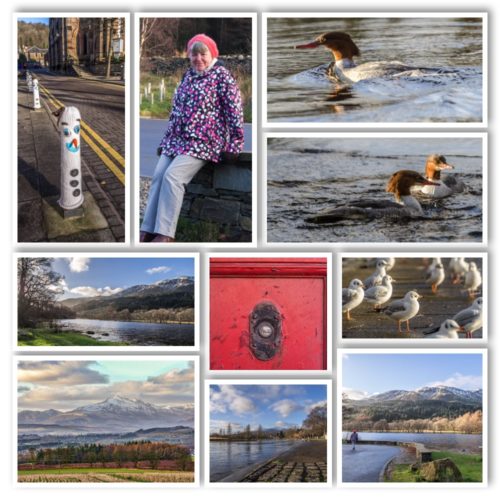 After the last two days, we decided to get out and about today and that is what we did.  We agreed on Loch Lubnaig as the destination.

It was a pleasant drive along from Stirling to Callander and on to the loch itself.  We’d decided to park at the big car park.  We were pretty sure the cafe wouldn’t be open, but when we got there, we found the car park was locked up too.  Barrier down and padlocked.  What pinhead in the quango that owns this car park decided it would be a good idea to lock up it up during the Christmas holidays?  Don’t they want to encourage tourism?  Probably not.  So, having been baulked by our first attempt, we went back to the smaller parking place, where you are also expected to pay to park 366 days a year and what do you get for your £1.40 per two hours?  Well, you get a hard standing and … Well, that’s it really.  No toilets. No cafe.  No shelters.  You do get picnic benches and BBQ holders.  Unfortunately, we didn’t have a BBQ, or a picnic, or £1.40.  Actually we did have the £1.40, but that had been pre-allocated for parking at the big car park which does have all the aforementioned facilities.  We were rebels!  We didn’t pay the parking fee.  So, Mr Car Park, “I don’t want to park with you no more, you empty-headed animal food trough wiper! I fart in your general direction! Your mother was a hamster and your father smelt of elderberries!”

I took some photos of the hills around Lubnaig from CP2 and then we drove down to the hedonism of Callander itself.  This time we did pay for parking, like good little tourists.  The River Teith was just about bursting its banks with all the rain that’s fallen in  the last few days and the car park is right down next to the river, but Callander isn’t a very big (or interesting) place, so I didn’t reckon we’d be there long enough to get flooded.  We walked down one side of the main street.  At first I thought everything was closed.  I was half right.  All the shops were closed, it was the cafes and tea shops that were open.  We eventually chose a dingy little cafe.  All we wanted was a coffee and a bowl of soup or a sandwich.  I finally settled for an Award Winning Pie (which was actually very good!) and Scamp had a vastly overpriced bowl of soup.  We also had two cups of brown water.  At first I thought it was just straight out of the river, but then I realised that the river water was darker than this stuff.  It was meant to be Americano, but I think they were cutting corners and just steeping the beans in the cup without grinding them first.  I can honestly say it was the worst cup of ‘coffee’ I’ve ever tasted.  Even Starbucks would be better than that.  No, wait, that’s taking things a bit too far.  At least I could drink this dishwater.  It didn’t taste of anything but nobody asked my name so they could write it on the cup.  I don’t think they do that any more in Starbucks for obvious reasons.  “Hugh Jars.   Your americano’s ready!”

Got some pics of Goosanders on the river and of some neat yarnbombing going on in the town before waving goodbye to great pies and boggin’ coffee and heading for home.  On the way we stopped off to see David Stirling the hardest man in Stirlingshire.  His statue stands on a wee hill overlooking the snowy hills of Perthshire.  Then it was back to motorway driving all the way home.

That was a beautiful day and I think Scamp enjoyed it as much as me.

Tomorrow?  No plans as yet.