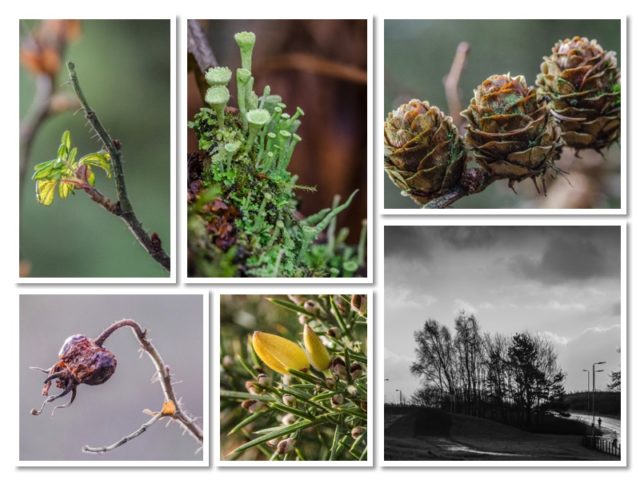 Howling wind and rain battering against the window all night it seemed.  Wildly high temperature too.  Almost too hot to sleep.  There really is something wrong with the weather this year.  I’m not a firm believer in Climate Change, but I’m willing to admit that this just is not the weather we are used to having in Scotland in December.  Whether it’s El Niño or the Jet Stream or melting polar ice caps, I don’t know.  I taught Woodwork and Graphics, not Geography, but I know when something isn’t working properly.  Maybe Theresa May will fix it.  There’s as much chance of that as there is of her arguing a profitable exit from the EU, but that’s enough of politics.

The wild winds and heavy rain persisted through the morning, but by afternoon the dry spells were outlasting the wet ones and the temperature was returning to the seasonal normal, so I got my boots on and headed for St Mo’s to get some photos … and some exercise.  Much needed exercise.  I had to shelter for a while under a tree form some heavy rain, but I didn’t mind that because I could see that it was only a shower and there was blue sky behind it.

Other than the swans and some ducks, I saw no other wildlife, and very few of the human variety.  I could hear a motorbike engine coming from the old BMX track, so I presume some wean got a mini scrambler bike for Xmas.

Most of todays photos were taken with the old 105mm macro lens on the Nikon.  I forgot to grab my Oly M5 and stick it in my pocket which meant no real landscape shots, but I did like the B&W shot of the runner, just visible bottom right of the frame.  Much better on Flickr.  Speaking of pocket, I DID put one of my Chrissy Prezzies in my pocket.  Scamp got me a pair of Thinsulate gloves and I’d forgotten just how windproof they are.  Great things to stick in your pocket.

Just like I intended, Scamp suggested pasta for dinner, so it was tomato and bacon pasta.  Nicely low cal.  I did have some of the killer pudding from yesterday, but only a couple of spoonfuls and even they were mainly the biscuit and sherry mix with some fruit.

The wind has dropped considerably tonight and it looks like a fairly decent day tomorrow.  If we manage it, we’ll be up and out early and somewhere nice for a walk.  That would be good, and would probably do us the world of good.