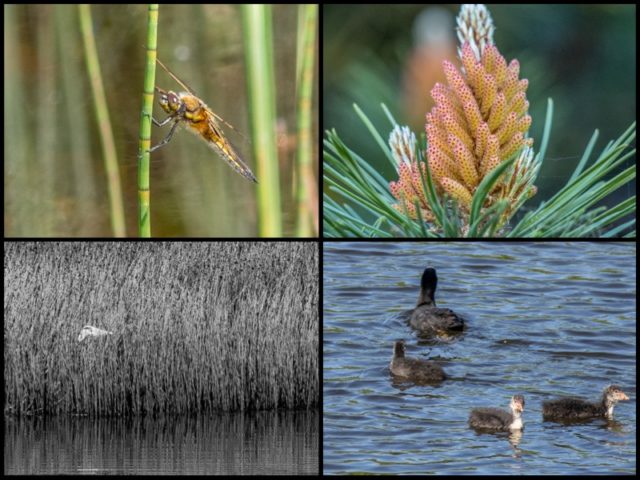 Scamp suggested a walk along the canal this morning.  As it was so bright and sunny, it seemed a shame not to, so we drove down to Auchinstarry and headed off along the railway to Twechar.  Maybe it’s because we were talking all the way and maybe it’s because we were marching along quite sharply at Scamp’s usual pace, but I didn’t take a single photo all the way there.  Even on the way back I only grabbed two desultory shots of some backlit grasses, neither of which made the final cut.  The word ‘desultory’ always makes me think of A Simple Desultory Philippic.  It was a track on Simon & Garfunkel’s Parsley, Sage, Rosemary and Thyme album, and I never really understood it.  Liked it, but never understood it.  But to quote Dylan, “I was so much older then, I’m younger than that now.”  It was just after the grass photos that Scamp said that this was what retirement was for.  It’s strange, but last Tuesday, a week ago, when I was out walking around St Mo’s about 5.30am I was thinking exactly the same thing.

Didn’t do much else when we got back other than cut front and back grass while Scamp went to a ‘Witches’ meeting.  Don’t ask, it’s just an opportunity to gossip!  No spells were cast.  Later, when the light was better, I went for a walk in St Mo’s, being careful not to go in to the wild wood for fear of little beasties namely ticks which I seem to be very prone to.  Got some decent shots of the baby coots and Mr Grey hiding in the reeds, pretending he wasn’t there.  Then, in one of the smaller ponds, I spotted a dragonfly.  It’s still May, ok the end of May, but still May and there are dragons out!  Unheard of.  I’d say that this might be summer starting, but I know from the weather forecasts that next week rain sweeps in.  Still, we’ll take all the sun we’re offered and say thank you very much.  This is what retirement is all about.