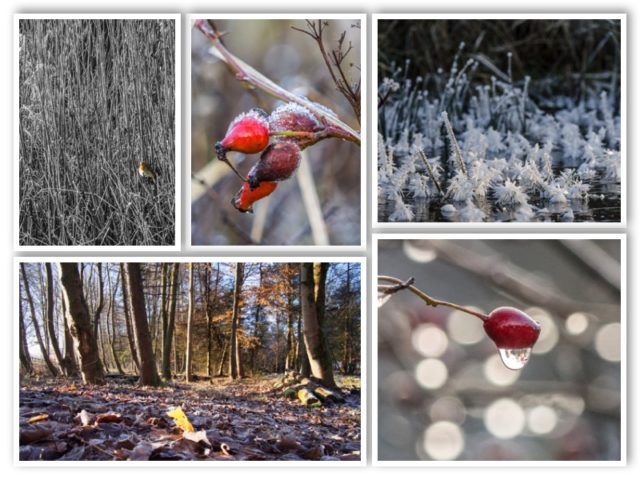 Up and out of bed before 8.00 this morning, but it wasn’t the desire to take photos in the frost that was sparkling in the morning air that got me up, it was someone knocking the front door.  It turned out to be the wrong address.  The gas man was actually looking for the bloke next door.  However, it did get me up and that led to me achieving yesterday’s target.

Walked through St Mo’s and got a few photos, some of which are in the matrix above.  There was quite thick fog when I left the house with a temperature of -5.6ºc, but when I reached St Mo’s a few minutes later, the fog had gone, taking with it my chance of some ethereal early morning shots.  I did see a deer, but it was far to far away and moving like the wind.

By the time I got home, Scamp was scraping her car and since I was meeting Fred for coffee later, I decided to clean mine too.  The joker who lives a couple of doors down had parked next to me last night and left my car in the shade of the early morning sun that I’d hoped would have thawed it out.  People should think before they park next to me.  So it was frozen hands for me before lunch, but at least the windscreen was clear.

Met Fred for coffee and swap shop.  2 CDs from him to me.  1CD from me to him.  Not a lot to discuss today and I think the cold is getting to all of us.  He’d done some sketches of course and so had I, but not as many from each of us as we’d had in the past. 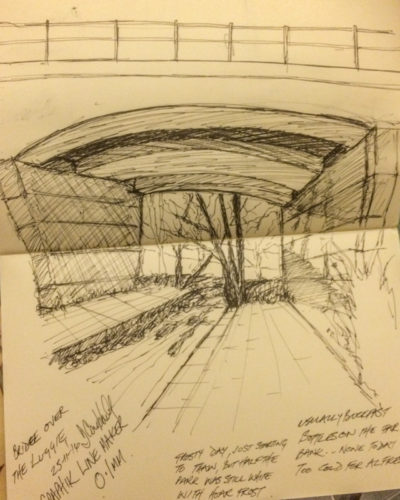 Fred had to leave early so I did too.  I walked along the Luggie again and, probably with the thought of sketching in my head, got a quick sketch of a bridge done.  Not the most beautiful structure, but  architecturally interesting and demanding from a perspective viewpoint.  It’s not quite finished, but it was quite cold and my fingers were getting numb and I’d got a likeness of it.  I had my leather gloves with me, the expensive ones.  Two pairs for a fiver in Perth one year!  I should have worn the fingerless gloves Hazy gave me to keep my hands warm but my fingers free.  They’re not just for FOTO GRA4s! (in joke).  They’re going in my jacket pocket tonight.  I got some photos down the Luggie too.

From the 44 photos I took today, I whittled them down to 14 and from that I chose my 5 favourites.  That’s what you see above in the matrix.

Looks like it won’t be quite as cold tomorrow.  Ice is nice as long as it doesn’t stay too long.