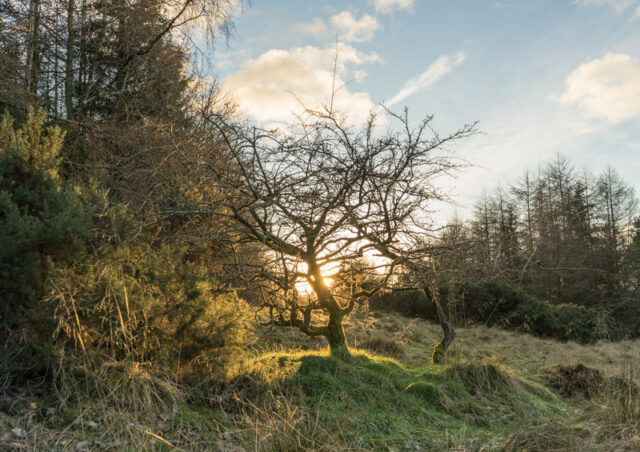 We looked out the window and nobody else had moved from their parking spaces, so why should we?

I’d planned a drive over to the Carron Reservoir for a walk today, but with the prospect of sub zero temperatures all day I changed my mind I didn’t mind driving up the Tak Ma Doon road with its single track sections and the blind 90º bends. But the thought of all the recent rain we’d had freezing made me think “Another day perhaps”. With discretion the better part of valour on this occasion, it was walking boots on and a wander down around Broadwood instead, with the possibility of dropping in at the shops on the way home.

That’s what we did and I did get a chance to try out the Tamron at its 300mm length to grab some waterfowl pictures. Some goosanders and coots posed for me and I gratefully took their offers. However I forgot to check the aperture and good though the Tamron is, it needs to be stopped down a few notches to produce its best work. Although the temperature didn’t rise much above zero, it didn’t feel that cold, although, as Scamp reminded me, that was probably due to the lack of wind.

Back home and it was soup for lunch then, after I’d checked the photos and declared them wanting, I went out again to St Mo’s. I gave in to temptation and carefully placed my Sony A7M2 on the ice of the wee pond, set the timer to 10 seconds and the focus spot on a wee bunch of weeds frozen in the ice, held my breath and pressed the shutter. Over £1000 worth of camera sitting on a thin sheet of ice produced the shot. Was it worth it? Only because the ice held! Don’t try this at home kids. If you like you can check it out on Flickr. PoD was from the same spot, but looking the opposite way. It’s an old hawthorn bush, bent out of shape by the wind howling in from the west. I loved the rim lighting effect from the moss on the trunk and that little hole that allows the sun to shine through. Instant PoD.

Back home for the second time today and a parcel was needing wrapped. I knew I would get in a fankle with sellotape and crinkly Xmas paper. I was right, I did, but the parcel is now wrapped. And wrapped to my satisfaction too.

Sirloin steak for dinner 3 minutes per side in the new pan and then rested for another 3 minutes. Scamp had a nice looking thick slice of lightly smoked salmon. Both accompanied by our favourite potato wedges with Italian rosemary salt. Honestly that was the best steak I’ve had, possibly ever. It came from Lidl. I thought Aldi did the best meat. Lidl are hot on their heels. Nothing to do with the pan this time or the (lack of) skill my cooking brings to the final result. It’s down to the quality of the meat.

That was about it for today. The day before Christmas. In the past it was about trying to keep children occupied and tiring them out before bedtime while one of us was wrapping up bikes and dolls and even a garage that I just managed to finish before midnight. Now it’s a frantic fight with sellotape and wrapping paper followed by a G&T watching a documentary about Central Station. How things change.

Tomorrow is Christmas with all that entails. It’s still fun though!  Hope all my readers have a relaxing day tomorrow.